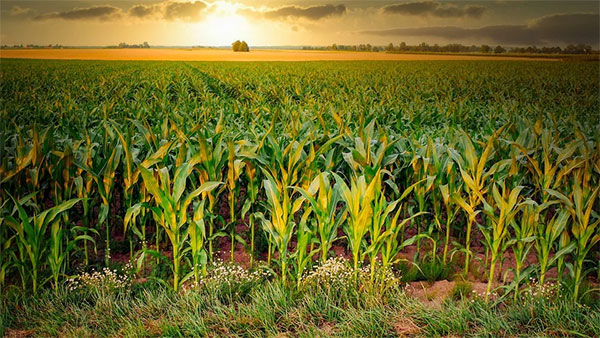 Maize is the third most important cereal crop in the world and is becoming increasingly popular in the UK, albeit that most is not directly consumed by humans.

As a C4 plant, maize is generally more water efficient than a C3 plant making it more suited to dry climates/regions. It is a rapidly growing crop and very hungry for nutrients in order to maximise its potential –
Phosphorus in particular, hence the use of starter fertilisers, manures and composts to help establish the crop.

Phosphorus plays a key role in maize production with a number of functions in the plant:

Phosphorus plays a key role interacting with other nutrients in both a synergistic (e.g. nitrogen) and antagonistic manner (e.g. zinc, calcium, copper).  The synergy with nitrogen can play a major role in nitrogen-use efficiency… 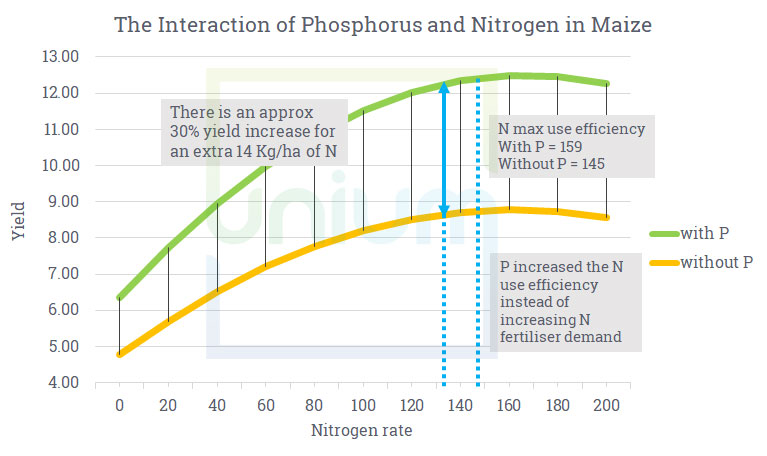 These data show the long-term difference in yield caused by annual fertilisation with P at a rate of 40 lb P2O5/A/year. This experiment was continued for 30 years from 1961 to 1991.

One of the key antagonistic interactions with a high level of phosphorus is with zinc (Zn) and we would recommend a foliar application of zinc to prevent this from being a limiting factor.

When plants are Zn deficient, their ability to regulate P accumulation is severely impaired.  As a consequence, P absorbed by the roots accumulates in excess in the shoot (as can be seen in the data below for the Kansas example).  The negative interaction between the two nutrients appears to occur in the plant, not in the soil.  Zinc and phosphate can react in the soil to form zinc phosphate, but its solubility is usually sufficient to provide adequate Zn to plants (Havlin et al., 1999). 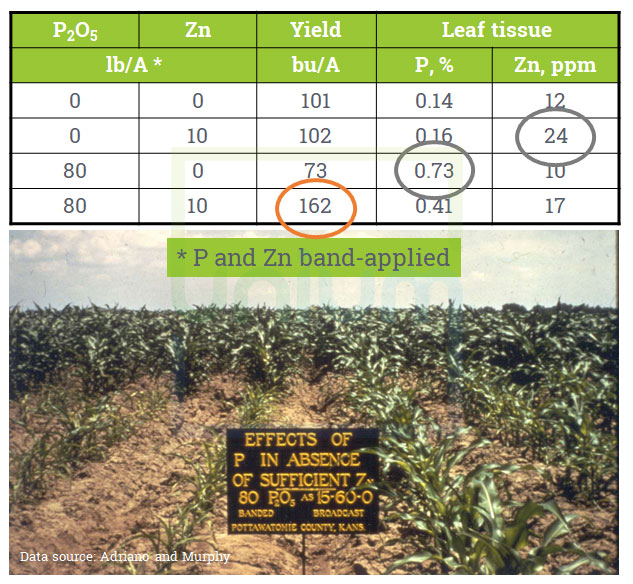 The maximum rate of uptake of phosphorus per hectare is often during the period of active growth up to tasseling, as shown in this example below from Indiana.  However, the same study indicated that while P uptake was very small from 25 to 29 days after planting, the rate of uptake per unit of root was as much as ten times greater during that period than at any time later in the season. 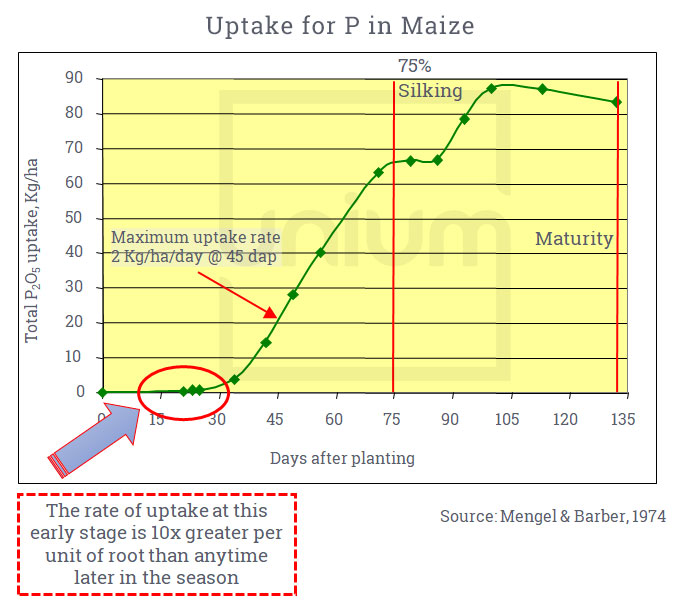 The following data shows that the more phosphorus there is available in the soil, the more responsive a crop is to foliar applied phosphorus. This is particularly true for calcium phosphite applications, which trigger increased nutrient acquisition and assimilation from the soil – this is particular helpful under difficult soil conditions. It’s not only phosphorus uptake that benefits, the same is true for potassium, magnesium, calcium and other micro-elements. 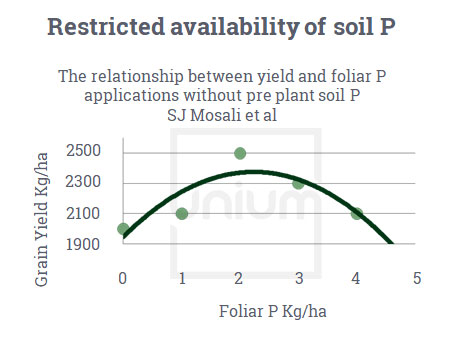 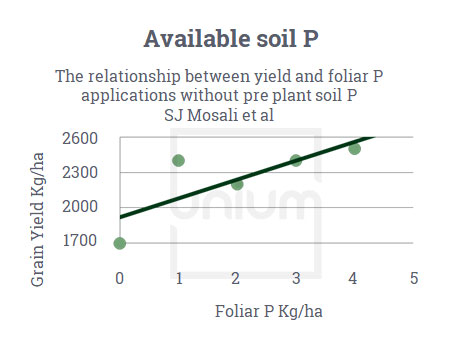 After that period, the seedling requires an external phosphorus source, either from the soil or fertiliser, to maintain and optimize growth. The rate of uptake within the first 15-30 days of plant growth is 10x greater per unit of root than any time later in the season, highlighting the critical requirement at this early stage of enhanced rooting and available phosphorus.

Early season limitations can result in restrictions on crop growth, from which the plant cannot recover even when the P supply is increased later. Maximum root growth is achieved when P is supplied for the first 4 weeks of growth.  When it was restricted for the first two weeks, secondary root development was hindered and yield was reduced to 80% of maximum (Boatwright and Viets, 1966).

Early phosphorus supply is critical to maximise potential and something we have known for a long time based on the agronomic practise of applying manures, composts, starter fertilisers etc and latterly biostimulant/nutrient seed treatments.

This can now also be supplemented with stabilised, buffered and safe calcium phosphite applications between 2-4 leaves to ensure these potentially limiting factors are removed. 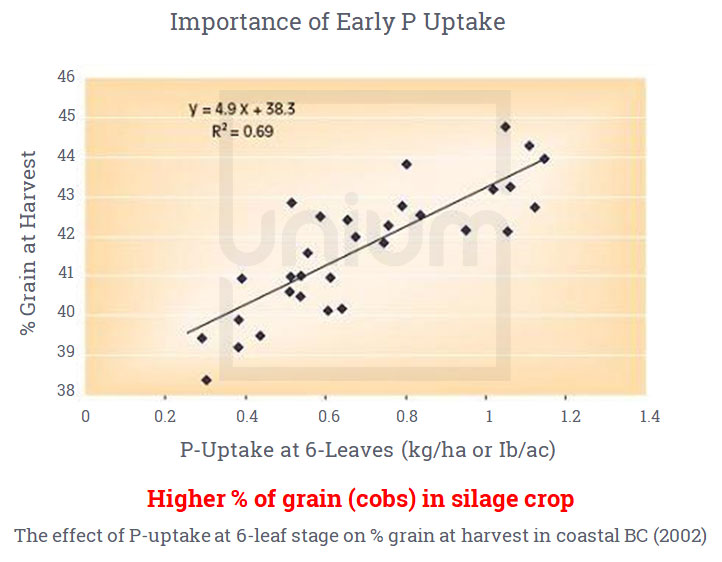 Last year we carried out a very detailed piece of work in Poland at Posnan University, looking at the application of calcium phosphite rates and timings, with detailed measurements during the season.

Summary of the Report 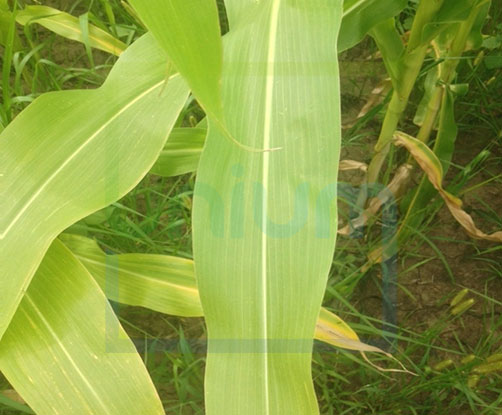 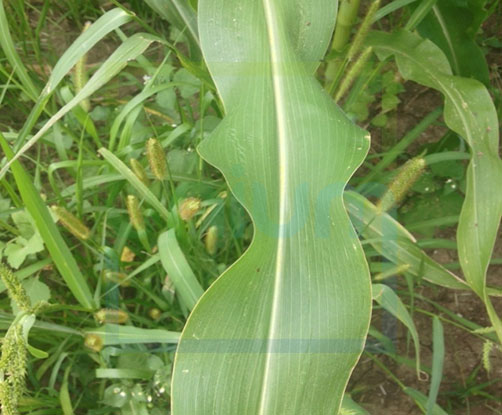 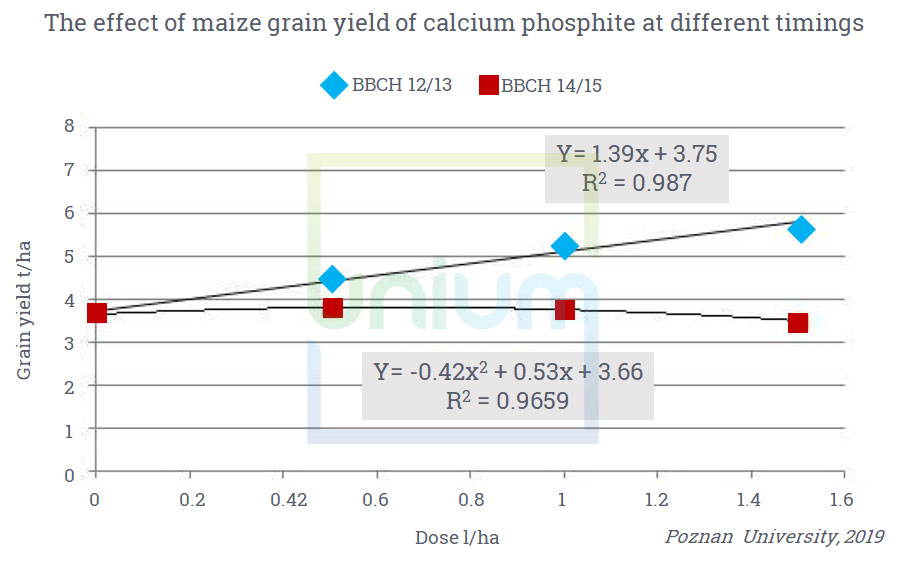 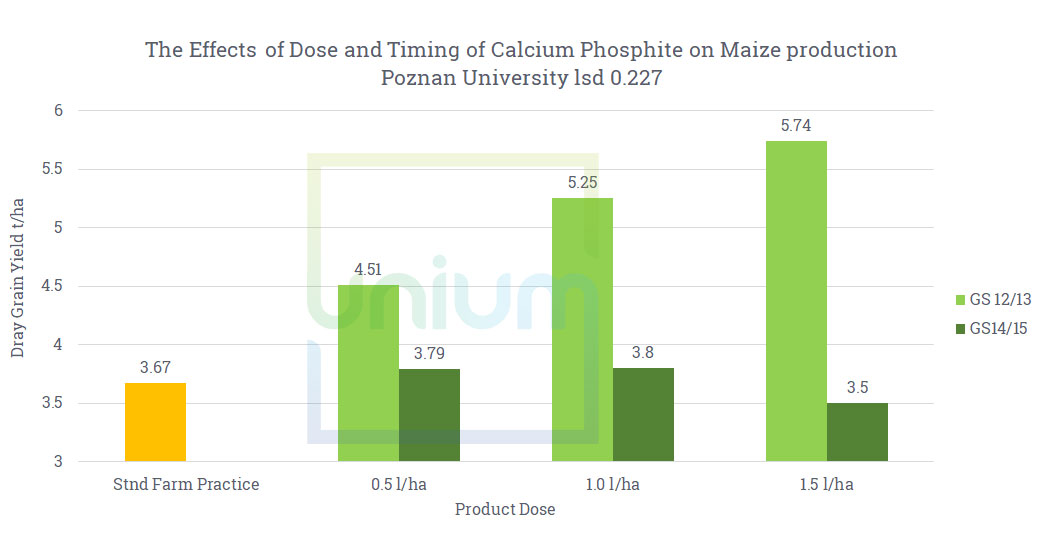