Skip to content
Endophytes in Space: How microbial plant probiotics could help grow food crops in microgravity and on other worlds

Endophytes in Space: How microbial plant probiotics could help grow food crops in microgravity and on other worlds

Astronauts at the International Space Station (ISS) and one day on the moon or Mars will need to grow fresh food with limited resources under environmental stress. A student led research team of microbiologists, plant scientists and space hardware engineers recently sent rice seeds into space that were film coated with a healthy dose of diazotrophic endophytes (atmospheric nitrogen gas N2– fixing) plant microbes or plant probiotics in order to test their effects on seedling growth in habitats on the ISS. These student researchers at the Quest Institute are working with Dr. David Bubenheim in the Biospheric Science Branch at NASA’s Ames Research Center in Silicon Valley, California; Dr. John Freeman at Intrinsyx Bio; and Dr. Sharon Doty at the University of Washington.

Rice seeds in micro habitats were aboard a Northrup Grumman NG-13 Launch Vehicle spacecraft that is launched on February 15th, 2020 from Wallops Island, Virginia and has now docked at the ISS as a part of a cargo resupply mission. Half of the seeds travelled to space alone, while the other half were film coated with five different species of Intrinsyx Bio “Phase A” bacterial and yeast probiotic endophytes, originally isolated and characterized at the University of Washington. These naturally occurring symbiotic microorganisms live inside crop plants and trees which fix nitrogen N2 from the air, improve overall growth, reduce stress tolerance and increase mineral nutrient acquisition. These same “beneficial endophytic” microbes have already shown great promise through working with Unium Bioscience in the UK to enhance wheat grain yield (+0.8-0.9 tons/hectare) increase mineral nutrient concentrations and to increase corn grain yield in the field.

Researchers hope that these same endophytes may also help rice plants grow better in extreme low-gravity environments, and where Nitrogen is lacking in regolith but present in atmospheres such as inside moon habitats or in the Martian atmosphere (~2% N2). This educational research flight opportunity was made available to Valley Christian High School of San Jose, California; via a partnership with the Quest Institute for Quality Education and ISS National Lab implementation partner Space Tango who provides both the payload architecture and in-flight operations for this mission. The goal of the experiment, primarily conducted by students at Valley Christian High School in San Jose, California, is to learn how to grow rice better in the challenging, microgravity and limited Nitrogen habitat condition on the ISS. Researchers are applying the endophytes dried on a high grain yielding dwarf rice variety developed specifically for growth in space by Utah State University and dormant seeds are glued on filter paper without any nutrients.

“In order to grow crops for astronauts at the space station or who are lunar- or Mars-based, we can’t ship potting mix or fertilizer to these locations,” said Sharon Doty, a UW professor in the School of Environmental and Forest Sciences and a plant microbiologist who isolated and characterized the microbes used in this experiment. “We have to be able to get plants to grow in what is available with the most minimum inputs possible.”

The students are participating in the Quest Institute’s International Space Station Program and are mentored by Dr. David Bubenheim of NASA’s Ames Research Center’s Biospheric Science Branch and Dr. John Freeman of Intrinsyx. The experiment was prepped in a NASA Ames flight laboratory.

Dr. Freeman has helped to remotely hydrate and grow many NASA-ESA seedlings aboard the International Space Station and has used these same endophytic microbes to enhance the growth of crop plants working with commercial farmers here on Earth. Freeman has found that the crop plants thrive, even when given lower concentrations of nitrogen and phosphorus.

This work also confirms a 2016 study in which Doty and co-authors found that plants can better tolerate drought and other environmental stressors with the help of natural microbes that provide nutrients to their plant partners.

These specific endophytes and rice plants were chosen for the space flight experiment because they performed well together in UW greenhouse tests under growing conditions like Mars, where nitrogen and phosphorus are limited.

“In space, plants are usually stressed and don’t grow or reproduce optimally,” Freeman explained. “We want to help plants grow better through sending their normal ecological partners along with them dried on their seed coats to be ready to provide nutrients when they need them.”

The microbes are first encapsulated inside a coating that covers the rice seeds, which allows for dormant dry storage during launch before the seeds are hydrated and grown on orbit. Now that the endophyte-coated rice seeds have reached the space station, they will soon be hydrated in small Quest Institute – Space Tango plant-growth chamber hardware that provides constant light and atmosphere to promote growth. Cameras will take images of the seedlings at regular intervals, which will help researchers track overall seedling growth.

After the plants return from space, their growth and chlorophyll content will be measured and compared investigating inoculated plants verses controls that were grown without microbes.

Separately, Doty and her team will receive plant samples to investigate how well the microbe species colonized the rice in space, and whether they were as effective as when grown on Earth.

“We want to know whether the microbes still find their way inside the plant even in microgravity, and if any of the required plant signals are terrestrial-based,” Doty said. “We need to test if they are still functioning the way we would expect when growing in a foreign environment like microgravity under limited nutrients.”

Doty and her UW team isolated the microbes used in this experiment more than a decade ago from wild trees growing in nutrient-deficiency among the rocks and sand along the Snoqualmie River. The trees had already selected the best microbes to help them grow to an enormous size even in harsh nutrient limited conditions, so the researchers tapped into these isolated microbial strains and used them to help crop plants, grasses and trees grow in difficult low nitrogen and phosphorus limited environments.

These microbes can benefit crop plants and trees of all kinds, helping them convert nitrogen gas from the air into essential nutrients for the plant and reduce the need for synthetic fertilizer.

In separate space related projects, Doty and her lab, along with Bubenheim and Freeman, are starting to test whether plants given natural tree microbes can grow in conditions that exist on the moon and on Mars. They use regolith simulant — ground-up powdered earth rocks with no organic matter — that mimics extraterrestrial conditions to see whether microbes can help plants grow in harsh regolith soil-less conditions. The work is also part of the UW Astrobiology Program, which was the first university program of its kind when it launched 20 years ago.

“This is the first step in what I hope becomes a really long-term research program to develop habitation on the moon and Mars in a very efficient way using a natural symbiosis instead of trying to bring chemical fertilizer to those remote environments,” Doty said. 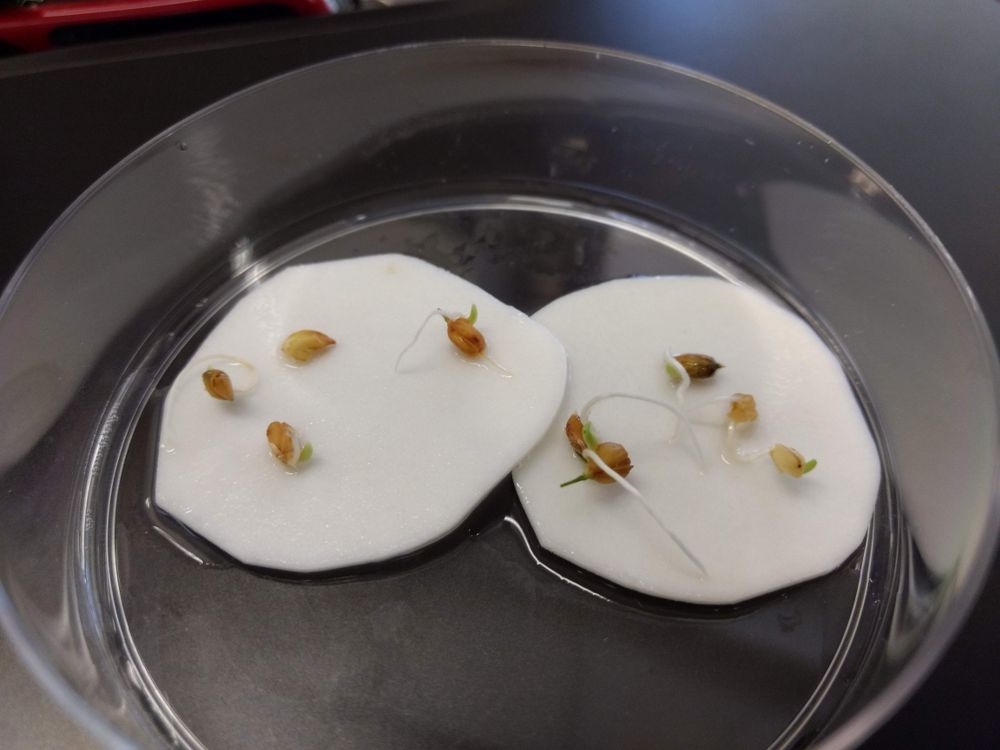 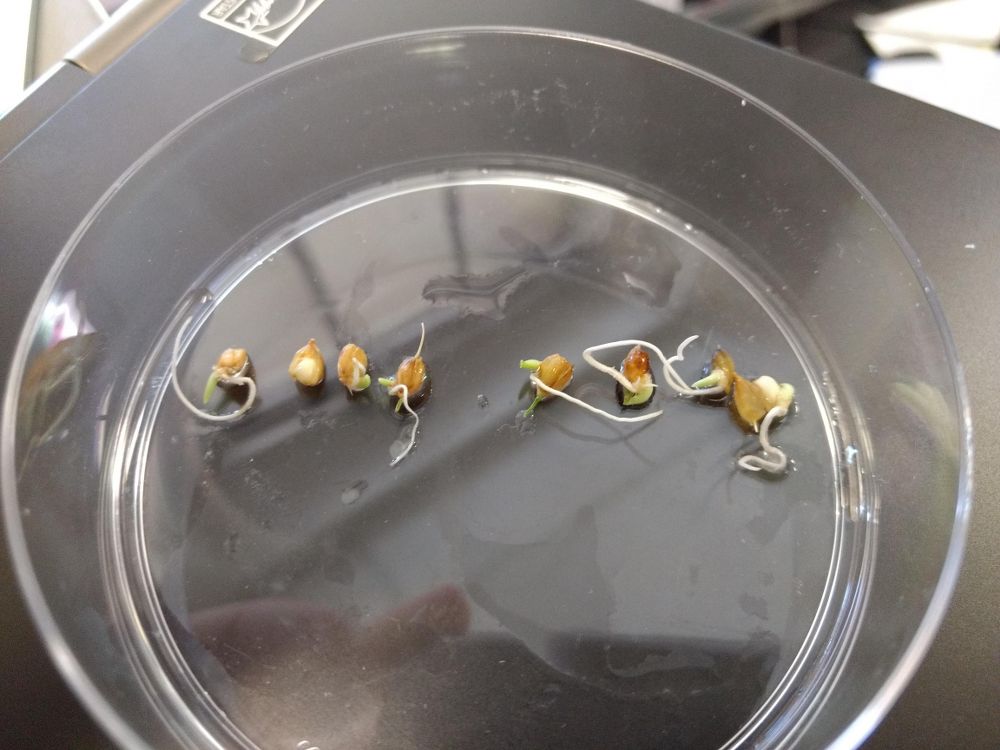 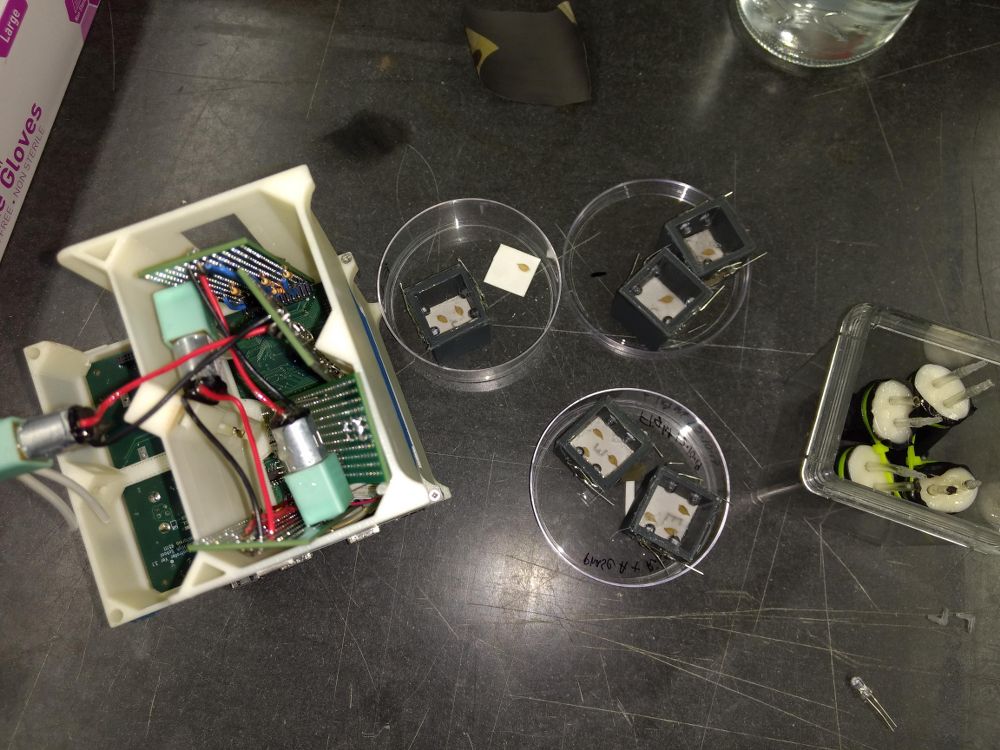