T6P One of the most exciting discoveries in plant physiology 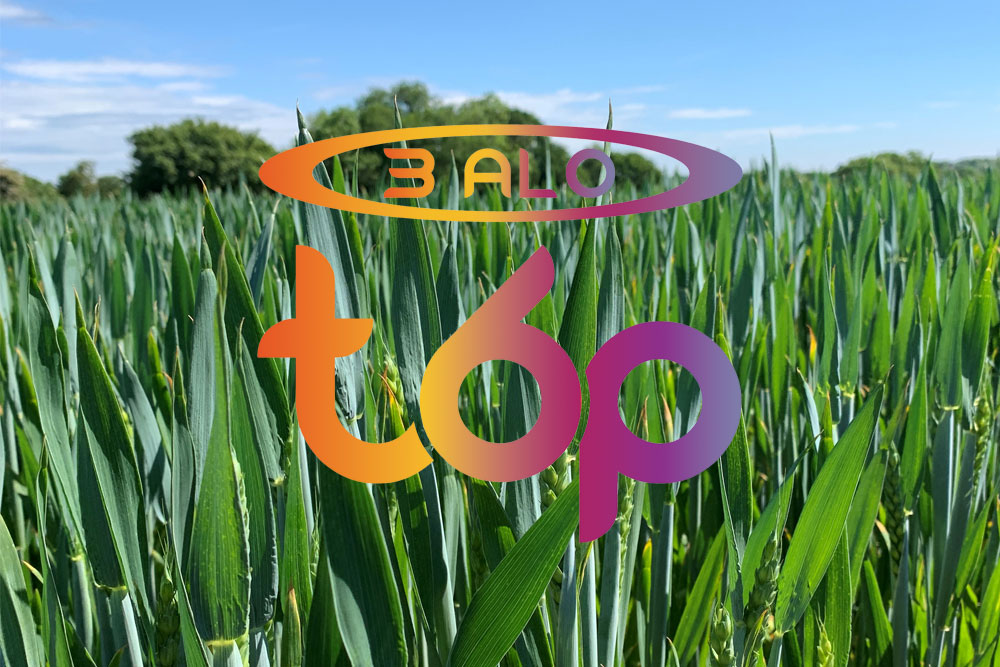 The trehalose pathway is present in all plants, it is a sugar-signalling mechanism that regulates metabolism, growth and development. It is critical for plant development in seeds (Eastmand et al 2002), vegetative growth and the transition to flowering (Schluepmann et al 2003) and yield.

T6P (trehalose-6-phosphate) is a central signalling compound in plants responsible for regulating sucrose and the way it’s allocated to crop growth, development and to different locations in the plant. Two of the key benefits are increased yield of the sink component e.g. grain or improved recovery from drought stress.

A signalling partner of T6P is the SnRK1 protein kinase – this performs a fundamental role in the physiological response of cells to regulating carbon allocation and utilisation within plants by manipulating biosynthetic processes (degradation and photosynthesis) to conserve them in times of stress. Many of the effects of T6P on metabolism and growth occur via the interaction of T6P with the SnRK1 protein kinase system. A large concentration of sucrose increases T6P and thereby inhibits SnRK1.

The balance between T6P and SnRK1 is critical in the gene management of these biosynthetic processes. In response to available carbon (baena-Gonzalez et al 2007) this instructs the plant to to switch from catabolism to anabolism.

This relationship between T6P and SnRK1 provides an understanding of the mode of action of the biostimulant . T6P inhibits SnRK1 in its catabolic processes, thus relieving its inhibition on growth and development and allowing the crop to continue growing, providing adequate carbon etc is available.

Both SnrK1 and T6P have opposite effects on the genes that control biosynthetic, catabolic and stress pathway to provide a ‘checks and balance’ in a feedback loop. 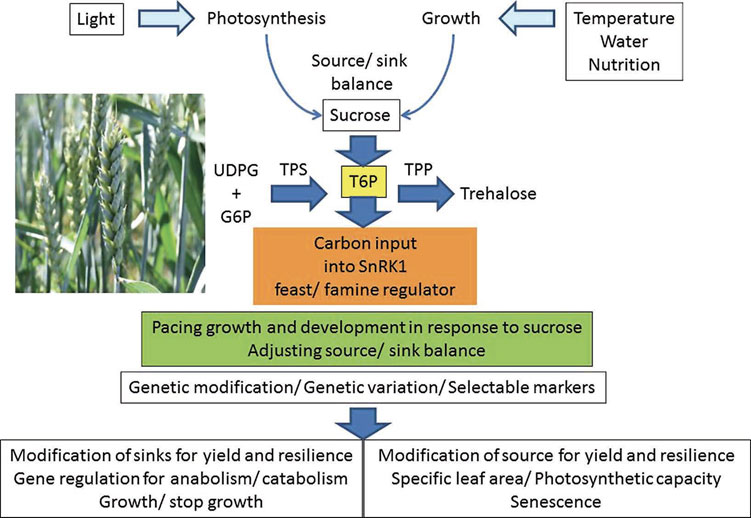 The majority of research has been carried out in wheat, maize, pulses and rice. More recent work has linked T6P with lipid biosynthesis (Shanklin et al 2018) in oilseeds, with other research in potatoes and sugar beet also showing very positive results.

Seeds deficienct in T6P are compromised in number, size and starch production. T6P also acts as a metabolic signal for the activation of auxin and subsequent seed filling (Meitzel et al 2019), and this could explain the carbohydrate partitioning within the crop in response to the hormonal control of plant growth. 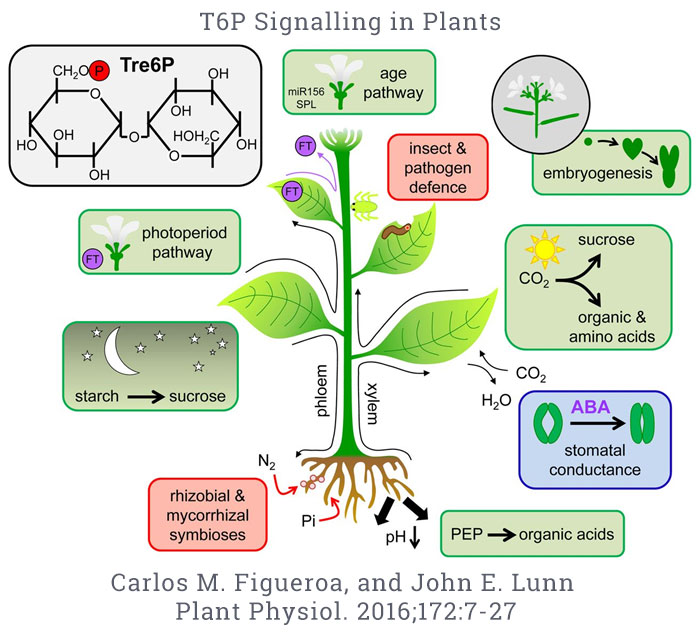 Tre6P signalling in plants. It is a signal of Sucrose status in plants and influences many metabolic and developmental processes, either directly (green boxes) or indirectly as the precursor of trehalose (red boxes). Both T6P and trehalose are implicated in regulation of stomatal conductance (blue box).  The central image is based on a drawing downloaded from www.plb.ucdavis.edu/labs/lucas/fig4.jpg.

With improved crop yields and an increased tolerance to every extreme weather factor desperately required, this area of crop physiology looks like a very exciting area of research and focus.

Increasing photosynthesis is one option available, with technologies such as 2 oxo-glutaramate, able to up-regulate the metabolic process, or  increase the photosynthetic capacity e.g. pentanoate (a critical pre-cursor for chlorophyll synthesis).  But how that translates into improved crop performance depends on the adequate development of sinks (e.g. the grain, tubers, fruit) which sequesters the carbon along with nitrogen etc.

It’s a complex balance under very tight genetic regulation for a wide range of environmental and climatic factors.  All of these areas must be considered and not any one in isolation.

The levels of T6P are at their highest in the pre-grain filling phase, falling dramatically from 10 days post-anthesis.

Crops are particularly sensitive to stress e.g. drought during the flowering period as it can limit seed set, final seed number and seed weight. The trehalose pathway is an important regulator in mitigating against this stress. 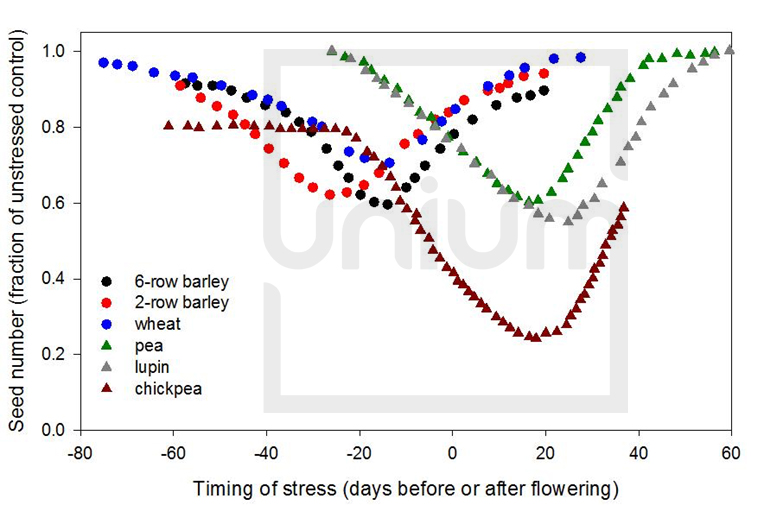 T6P can act as a major regulator in whole plant source/sink balance.  It is especially adapted to yield better under drought conditions, and even more so in non-water limiting conditions as it maintains an optimum source-sink balance, favouring sucrose allocation to florets.

T6P regulates seed filling through increasing cell differentiation and starch accumulation, maximising the efficient transfer of sucrose into storage starch and or oils. Wheat grain development is characterised by T6P accumulation pre-grain filling, so by maximising the T6P levels we can mitigate drought stress and maximise yield

T6P and S6P contents in whole grains during wheat grain development 1 to 45 DAA. Means of four biological replicates with se of mean. 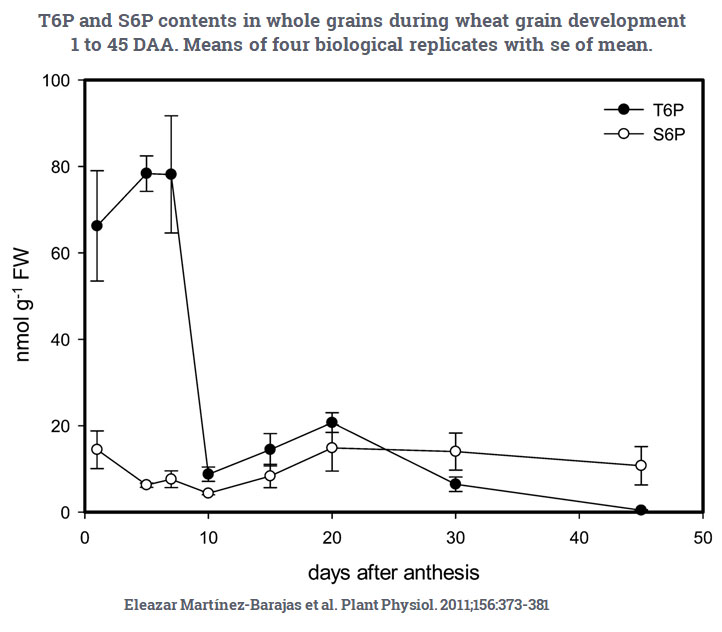 This is a very complex picture but creates opportunities to maximise the new genetics coming to the market.

The data below supports the stress mitigation with the maintenance of chlorophyll levels, which in turn leads to yield. 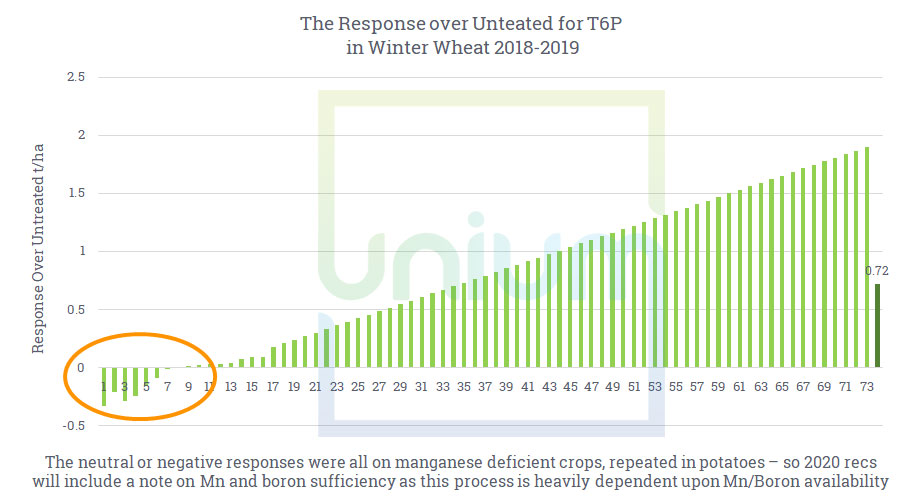 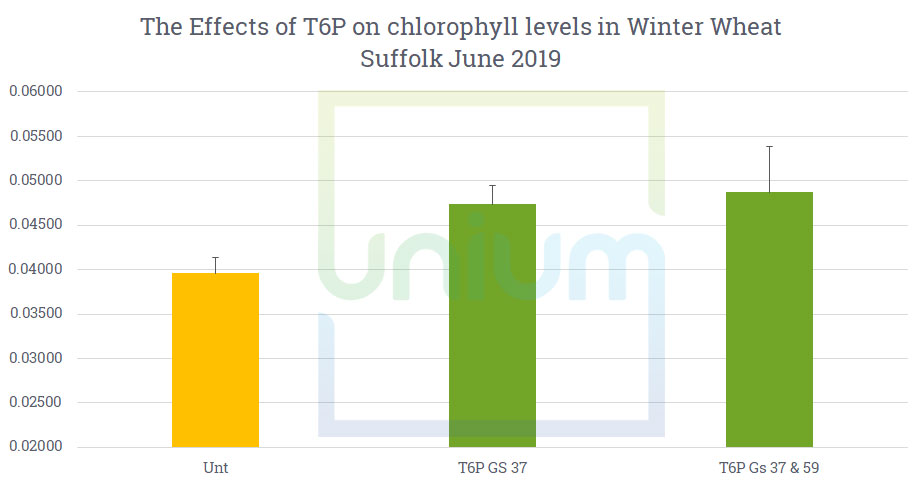 The two yield maps below show the tremendous results on two farms in 2019. One of the farms also had a map that showed a minimal increase but suffered boron deficiency. Another farmers extensive evaluation averaged a 0.1t/ha improvement but under severe Manganese deficiency.

Note the requirement for the sufficiency of manganese and boron which is critical for the full effect of T6P on carbohydrate translocation and partitioning. 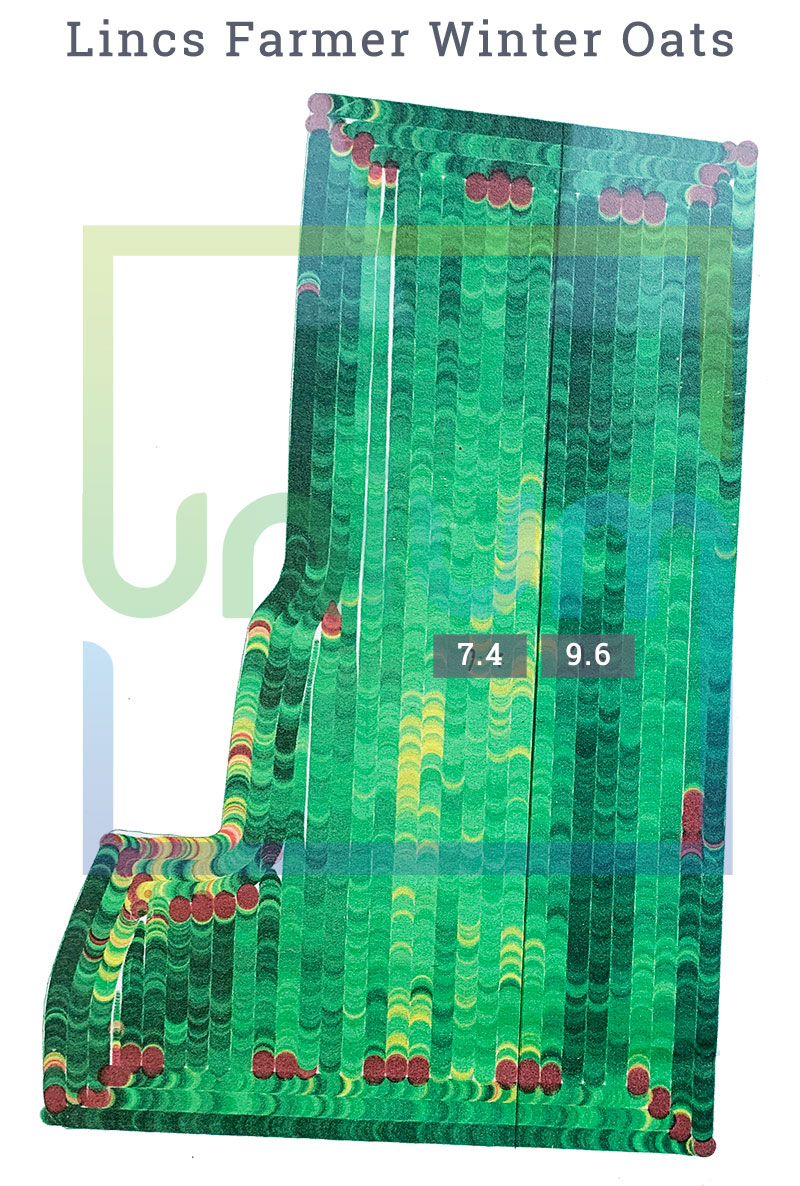 T6P has been very well recognised as a signalling molecule in the key trehalose metabolic pathway for many years but it is only recently Unium have been able to identify, develop and manufacture this molecule, in combination with the other peer reviewed technologies we hope to square a circle.

Fingers crossed we get some rain soon and it then knows when to stop.