Skip to content
Beneficial Microbes in Broad Acre Cropping; an increasingly necessary input which is now a realistic option

Beneficial Microbes in Broad Acre Cropping; an increasingly necessary input which is now a realistic option

Over the last decade an explosion in microbial based product platforms for agriculture has occurred in the marketplace driven by a market that wants zero pesticides, little or no synthetic fertiliser and (no surprise here) does not want to pay any more to the farmer. This article looks specifically at beneficial microbes.

Current scientific consensus indicates bacteria first evolved on earth approximately 4 billion years ago in a world very different from today. But somewhat surprisingly, many of the traits that evolved in these micro-organisms all that time ago are coded and retained in their genome. Examples of some of these capabilities are atmospheric nitrogen fixation; phosphite oxidation to phosphate; redox reactions of sulphur and transition metals; as well as many more microbiologically-mediated enzymatic biochemical pathways.

Over the course of evolutionary time, associations between plants and animals progressed into symbiosis and in some cases assimilation into the host as discrete organelles. Two well documented examples of this are the mitochondria, ubiquitous in animals and plants, and chloroplasts – the plant solar cells. So complex is the biochemistry of these specialised bacteria derived organelles, that much of their functioning remains unknown. These examples are very unique in nature and occurred over an unimaginable time scale. Without these two fundamental evolutionary developments, higher life forms would not have appeared on earth.

Beneficial microbial interactions with higher life forms are very much the norm and over the last 20-30 years, since the advent of molecular biological methods to specifically identify, sequence and amplify microbial genomes, we have greatly expanded our ability to identify microbes and their roles in both humans and plants. The figure below gives an idea of the impact of microbes in humans. 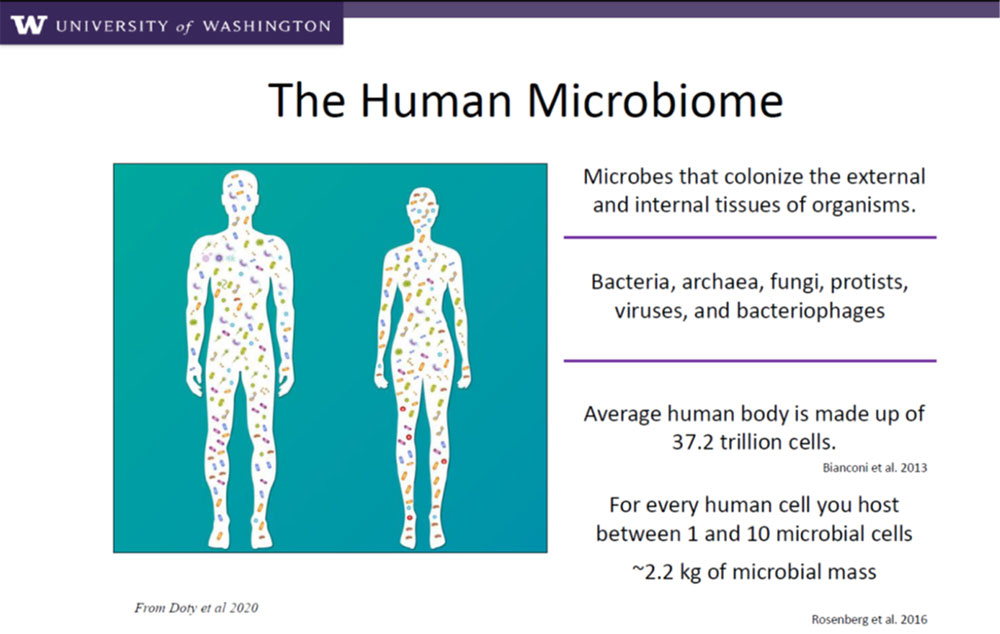 The human body has more bacterial cells than human ones!  Most of these are beneficial and we are just beginning to understand their role in so many aspects of human health, such as digestive ailments (Crohns Disease, Irritable Bowel Syndrome) but also in neurodegenerative diseases, such as Alzheimers and Parkinson-related disorders (https://www.neurodegenerationresearch.eu/2017/04/gut-bacteria-may-play-a-role-in-alzheimers-disease/). Now these are, of course, specialised bacteria that reside in a human’s digestive tract as opposed to ones that reside on the skin and do comparatively little mediation.
The plant microbiome is equally diverse, with a vast array of microbes inhabiting different parts of the plant. Generally the main focus of plant beneficial microbe research has been in the root zone (rhizosphere) where bacteria and fungi colonise the outer root surface or, in some cases, the outer layers of the roots (mycorrhizae). The figure below is a diagrammatic representation of the Plant Microbiome. 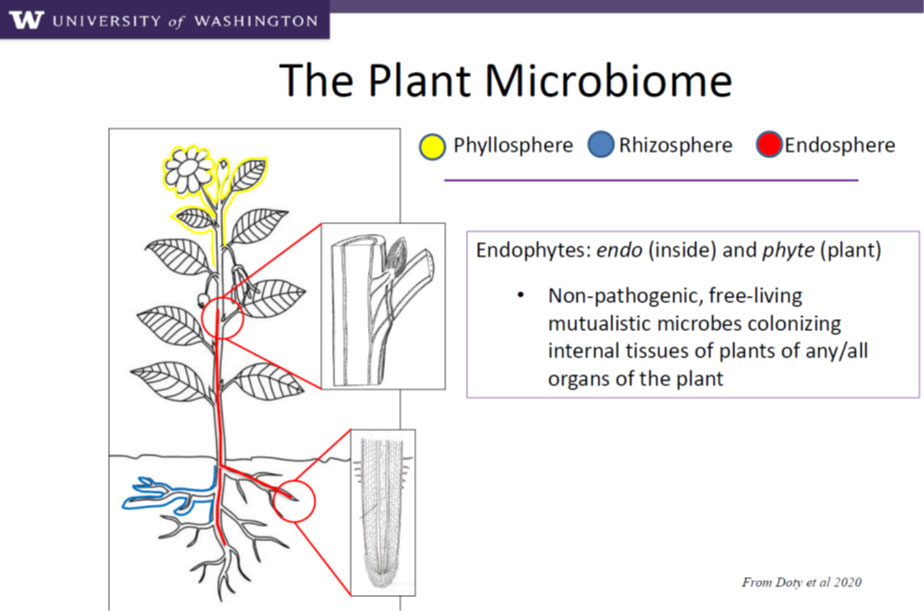 The main focus of microbial supplementation over the past several decades, or so, has been the rhizosphere. Root inoculants applied at planting or as seed treatments have had a market presence. However, low adoption rates for these technologies in broad acre farming is typical, primarily because of large variation in responses and inconsistent returns of investment. Biologically, transplantation of microbes from one ecosystem into another generally does not lead to persistence as the rhizosphere (natural and agricultural) is one of the most diverse ecosystems on the planet. Hence many rhizosphere inoculants simply do not generally persist. A cursory review of the literature indicates significant opportunity for variable and negative effects on plant growth for non-symbiotic rhizosphere inoculants (https://www.ncbi.nlm.nih.gov/pmc/articles/PMC3728534/).

Probably the most researched areas in microbial rhizosphere inoculants are Mycorrhizal and Rhizobial inoculants, of which there are many commercial formulations. Mycorrhiza are present on the roots of 90% of terrestrial plants, where they provide significant enhancement of nutrient uptake (particularly phosphorous). Unfortunately, in agricultural systems they do not tend to be as abundant and/or persistent. Phosphorous fertilisers, fungicides and herbicides all have detrimental effects on their growth and artificial inoculations, particularly as annual crops tend not to provide consistent benefits – primarily as arbuscular mycorrhizal fungi (AMF) tend to require several weeks before they provide a positive benefit. Hence even with rhizosphere condition conducive to colonisation, much of the nutrient ‘heavy lifting’ is completed by the time AMF’s provide economic benefit. Generally, on grasses and cereals AMF’s have shown little benefit. On wheat a lack of economic benefit (as well as a yield reduction in some cases) from AMF applications has been reported. https://www.sciencedirect.com/science/article/abs/pii/S0167880912001028). Conversely in permanent crops there has been much greater usage, particularly when they are inoculated in the nursery.

Rhizobial nodule-forming inoculants are true symbionts in legumes and in many cropping systems (soy beans, pea) their adoption is significant (50-60 % in USA soy beans, 80% in Argentina soy beans). They are quite different from AMF in as much that they are bacterial and most importantly they are diazotrophic. They fix atmospheric nitrogen.

It is generally thought that under optimal conditions these inoculants contribute approximately 30-40% of the crop’s nitrogen need. Under sub-optimal conditions it is far less and, in some cases (such as excessive Nitrogen applications or environmental stress), nodule forming Rhizobial strains can become parasitic and actually depress yield (https://pubmed.ncbi.nlm.nih.gov/29768658/).
Used under the right conditions and managed correctly, Rhizobial strains are very effective in legume production. Unfortunately, in non-legumes there simply has not been the microbes, the formulation technology or the ease of deployment for biological systems to be effectively used for abiotic plant benefit such as nutrient delivery, augmentation and efficiency. However, that is now changing.
A major area for the potential adoption of biological systems is in nutrient management. Every farmer knows that for every kilogram of Nitrogen applied to the soil, maybe 50% makes it into the plant. The rest is generally lost. Regulators know this also and have begun actively regulating nitrogen use. These initiatives which often begin as advisory programs can mutate into regulations. In some countries the government sets limits and/or stipulates specific management practices.

Only two groups of organisms on earth can make reactive nitrogen from atmospheric nitrogen; specific bacteria and humans. The statistics around making ammonia (the vast majority of which goes into agriculture as synthetic fertilisers) is quite staggering. The atmosphere contains about 10,000,000,000,000,000 tonnes of atmospheric nitrogen. Transformation of some 3,000,000,000 tonnes of nitrogen to a reactive species, such as ammonia or nitrous oxides, take place every year globally primarily through biological fixation. The Haber-Bosch process (to make ammonia) accounts for another 300,000,000 tons of ammonia conversion from atmospheric dinitrogen and about 10% is transformed by lightning activity (https://www.ncbi.nlm.nih.gov/pmc/articles/PMC98982/;   http://www.bashanfoundation.org/contributions/Figueiredo-M/marciaestimates.pdf ). The energetic cost of the Haber-Bosch process is enormous and consumes approximately 2% of all energy consumed on earth and generates a massive carbon footprint.

By comparison, Biological Nitrogen Fixation (BNF) requires 50% of the energy to produce 1 molecule of ammonia compare to the Haber-Bosch process. The process is far less negatively impactful on the environment and, best of all, a viable reproducable technology has emerged to make this accessible to UK farmers.

It is critical in evaluation of prospective new microbiological technologies (or any other technologies for that matter) that ample data exists to make an informed decision as to the use in a particular farming system.

Returning to the ‘Plant Microbiome’ figure above, the new frontier in plant/microbial opportunities is the ‘endosphere’ which in the diagram is designated in red.  Molecular assessment has only recently allowed us to explore this new ecosystem in the plant. Unlike AMF and Rhizobia, these organisms (mainly bacteria and hence not fungicide sensitive) are systemic in the roots and stem. A leading program in the selection of these symbiotic endophytes is at the University of Washington under the leadership of Professor Sharon Doty. Screening of thousands of isolates have led to the development of a ‘Phase A’ platform of  microbes optimised for integration into diverse cropping systems. Intrinsyx Bio (based at NASA AMES, California) is the global licensee for these technologies and has led the formulation development, agrichemical/biochemical compatibility testing, field trialling and optimisation of manufacture.  Unium Bioscience has led the development programmes on Cereals, Oilseed crops and Potatoes in the UK and contributed to a very extensive data set.  It’s very significant aspect that NASA is evaluating these very same strains as a mission-critical component of the life support systems (food production) on long endurance space missions and planetary colonisation. All of these strains are currently being researched on the International Space Station.

A key component in the success of these Phase A strains, which in the UK are marketed as TIROS®, is the integration with chemistry. This careful marriage contributes to greater consistency and integration into standard farmer practices. TIROS is a product that not only can be applied to the seed but also can be applied to the foliage as these microbes have also been selected for foliar ingress into the plants vascular system, a very unique attribute.

This exciting technology is now a reality and will be the first of many new biological products that will offer many benefits to agriculture, horticulture and the home and garden market as they improve nutrient efficiency, reduce pollution and enhance the carbon footprint.