Supercharge your Wheat with TIROS

Supercharge your Wheat with TIROS

Winter Wheat is a sink dependent plant and so developing sufficient ears and fertile grains can compensate to a degree later in the crop’s life.

Every tiller produced increases the root mass (unlike barley) so, even if tillers die, the extra roots remain to contribute water and nutrients to the remaining plant. Maximising tillers maximises root structure.

Phosphorus is critical for successful establishment and Unium biostimulants will give the best support through germination to tillering.

Tiros takes our seed treatments to a new level, allowing the plant to continually fix nitrogen, sequester phosphorus and other nutrients from the soil throughout the life of the crop. 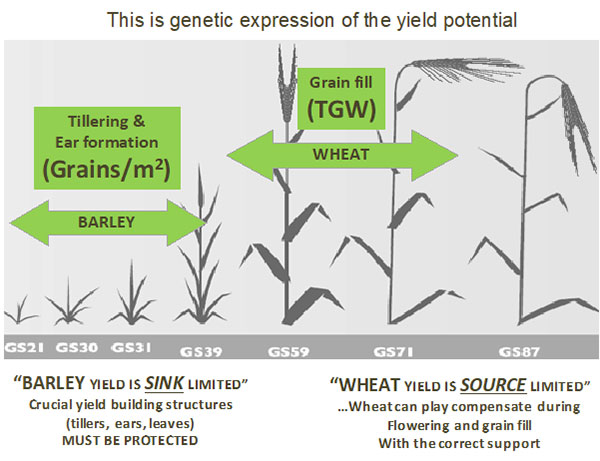 To initiate tillers requires adequate phosphorus and ongoing nutritional support to produce the ears for optimal yield contribution. Laying the foundations of yield starts with seed treatments which stimulates the plant to access and assimilate the required nutrition in the immediate and wider vicinity of the developing roots. 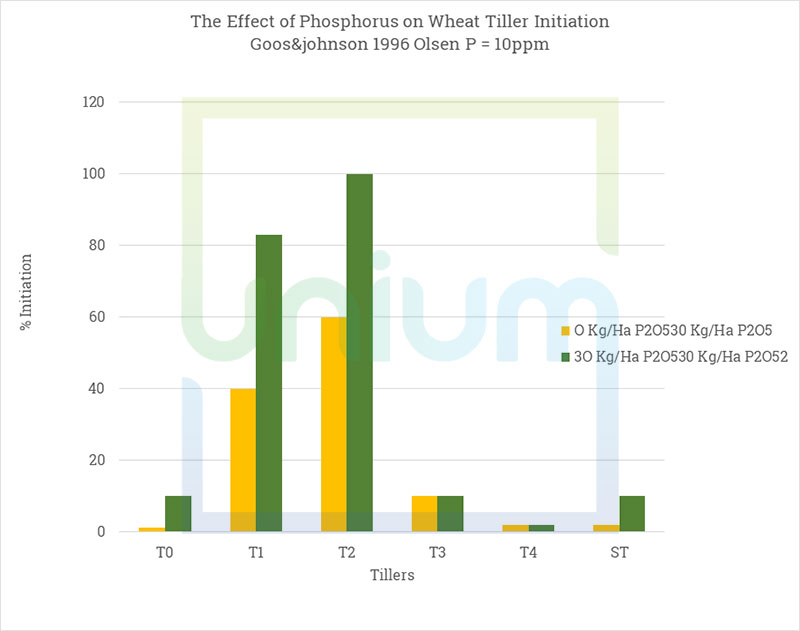 Cereals have 10-14 days of P contained within the seed to sustain growth before an external source has to be found, which is slightly more than oilseed rape. Phosphorus drives tillering initiation, so laying the foundations of yield starts with the seed. Seed treatments which place the required nutrition and stimulants in the vicinity of the developing roots allow the plants to establish quickly and achieve optimum growth, whatever situation they are in.
P requirements between imbibition and radicle/coleoptile development is greater than during tillering over the same time period (30 days).
Satisfying this demand gave:

The graphs below show the importance the plant puts on root biomass growth – initially developing at a higher rate than shoot biomass with the same phosphorus concentration, and by day 8 there’s a need for external nutritional supply. 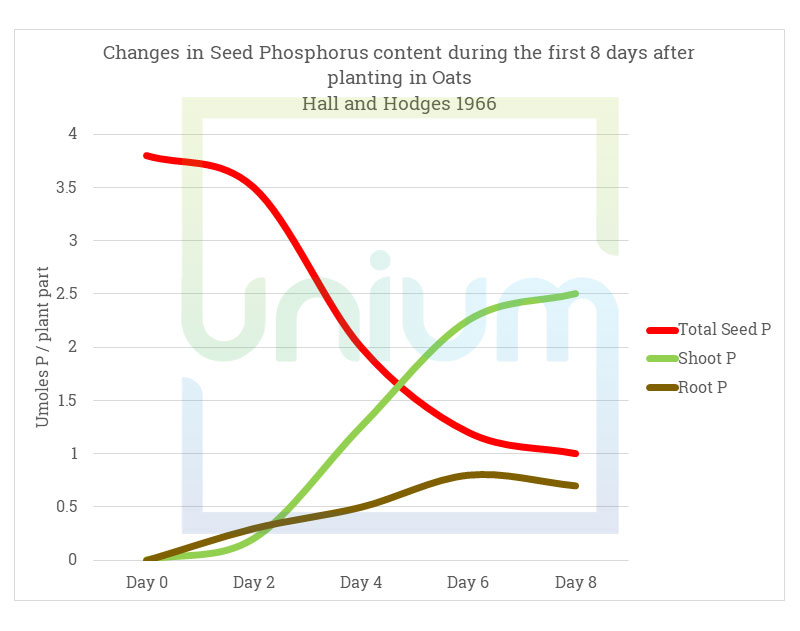 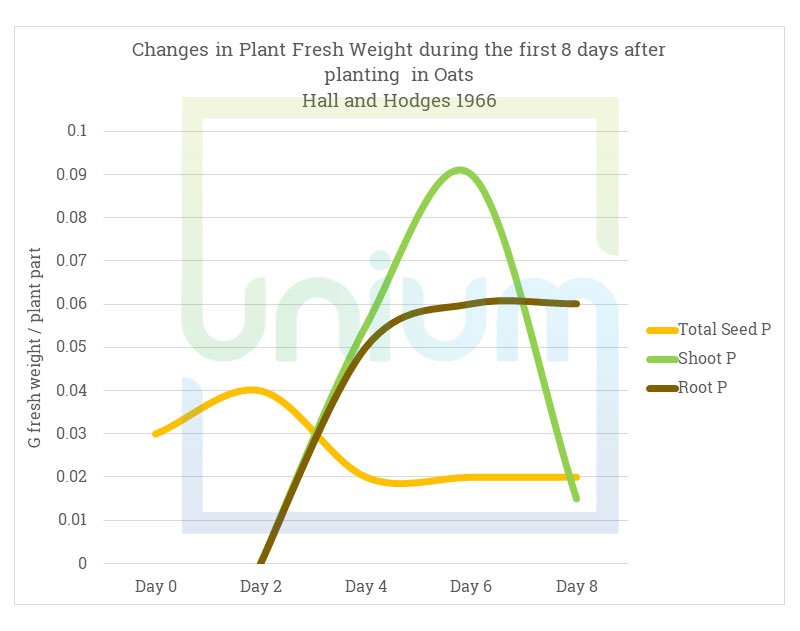 The scaffolding to support and enhance continued yield development comes from sequenced delivery of biological association, biostimulation and bioactive nutrition to build plant resilience during the growing season and thereby maximise yield and quality.

The level of storage phosphorus (phytate) in seed shows that most cereals are similar on average, but there’s wide variability in barley and wheat. This highlights the need for careful attention to ensure phosphorus is available at the critical time.

As soil temperatures drop, P availability decreases in conjunction with the degree of vesicular‐arbuscular (VA) mycorrhiza colonisation. This is more important for late-drilled crops and wheat.

This can happen quite quickly, for example when drilling rape in August around 48% of soil P is available, drilling barley in September it drops to 40% and for October drilled wheats its just 30%. Once we hit November, available soil P is down to around 20% and remains between 10-15% until March. So it helps explain the longer emergence periods the later we drill.

In wheat, any early season P-deficiency will limit yield potential when over 40% of the P will come from the soil/applied fertilisers. Wheat absorbs 15% of the total P in the first two weeks of its growth. For such a small plant that’s a lot of phosphorus. It is at a rate approximately 10x greater than at any other time in the season, highlighting why early season root development and available phosphorus supply is critical.
Phosphorus availability can be affected by many factors;

It’s known that roots, in general, can only access P from within 1mm of the root hair, unlike N which can obtained from 3-5 mm away. So it is critical to build biomass as soon as possible. P can only move approx. 25mm per year through the soil profile in contrast to N, which is highly mobile and can move the same distance in a week.
The optimum soil pH is between 5 and 6.5, with fixation reducing availability from 60% to 20%. 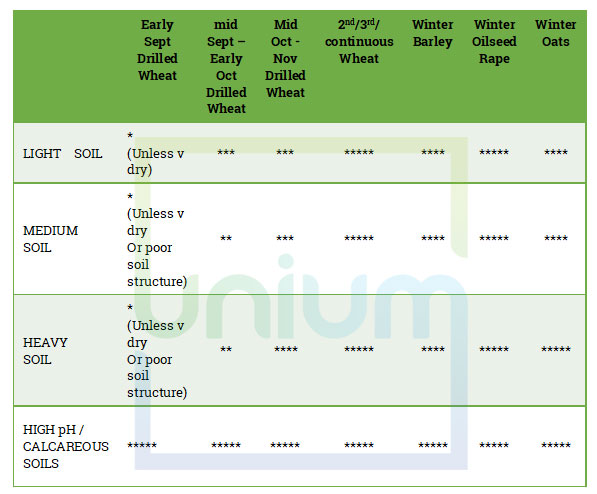 There are many factors that can limit the availability of P to the crop during the establishment phase. This gets more complicated as it is a biologically-mediated nutrient, so protecting soil biology is critical. High levels of macro fertilisers have a negative impact on soil biology, particularly nitrate and phosphate.

Fertiliser applications can overcome this negative impact by making P more available for a time, but it will take time for the biology to recover and play a role in providing nutrition later on. Phosphite, on the other hand, does not impact negatively on soil biology while it stimulates root activity and increases nutrient availability. 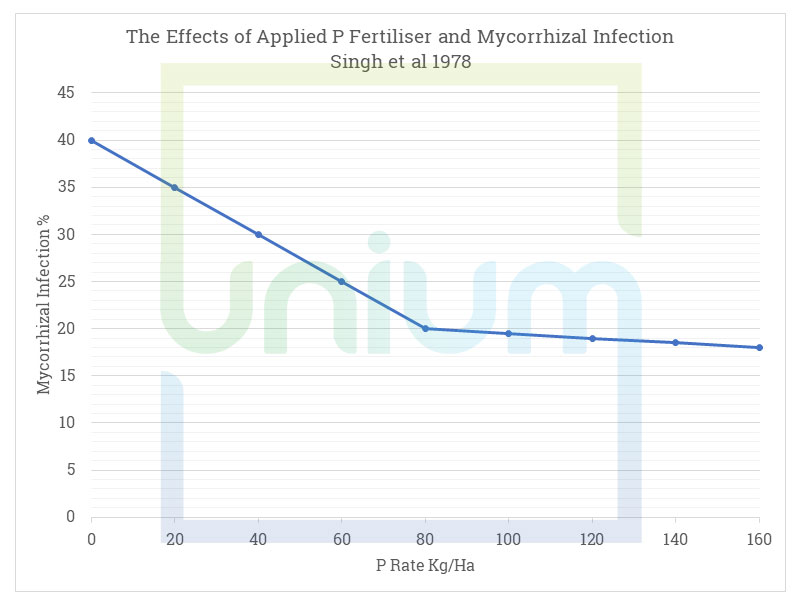 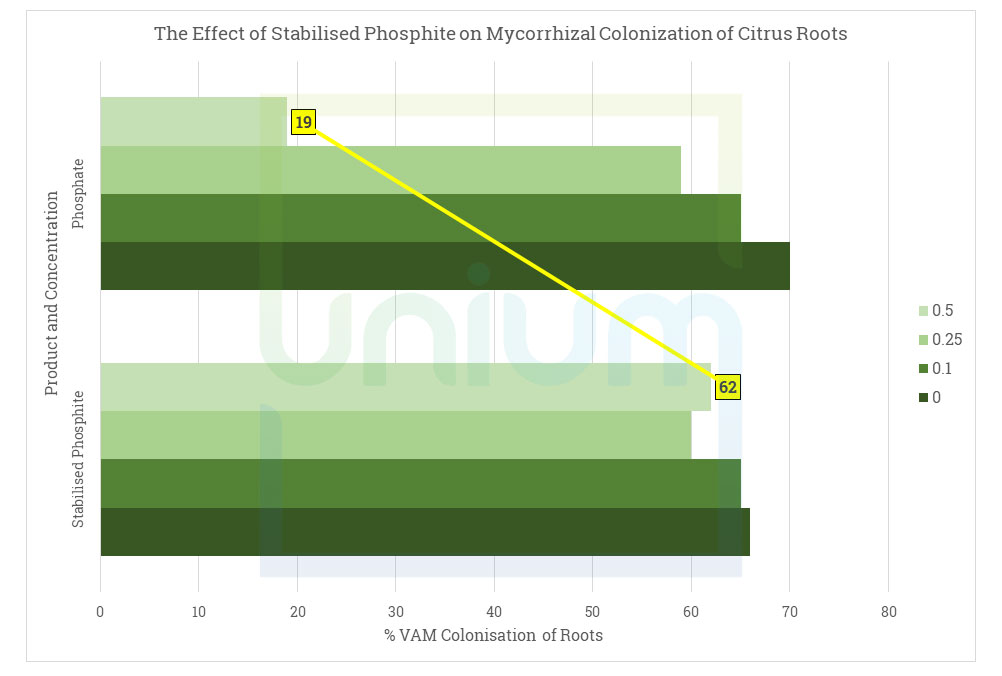 Recent work at California State University, Chico (Stone, B. M.Sc. thesis 2011) has shown that 70% of soil bacterial populations, surveyed from natural soils in California, can metabolize phosphites as a P source.

Our aim is to maximise root depth, development and activity (exudation) so that we get the best establishment and tiller initiation to take the crop forward.

Unium Seed Treatments (Boost, Tigga, Voltek) have been specifically designed to maximise root development. They provide phosphorus in a very available form at this key stage, as well as 2oxo/PGA to stimulate nitrogen assimilation, amino acids to support biology and other beneficial nutrients. This has taken biostimulant seed treatments to the next level set ting new standards by improving:

These seed treatments have now been joined and are perfectly complimented by Tiros, the first global commercialisation of the endophytes discovered by Prof S Doty of the University of Washington.

The endophyte strains in Tiros have been specially selected over the past two decades for their specific nutritional efficiencies and confers the ability to plants to fix atmospheric nitrogen and to solubilise and sequester phosphorus (along with other nutrients).
With more strains becoming available the biological arena represents an exciting new area of crop production

These endophytes live within the plant for the life of the crop and, as such, are much less susceptible to environmental stress compared with the biology that inhabits the rhizosphere. This helps to mitigate any environmental stresses that limit these two nutrients, increasing their bioavailability throughout the season.

With a yield response as follows:

We will continue to explore the prime option and will have four years work by next season.

These pictures show the longevity of the Endophytes (UBS001 is one our biostimulants Voltek). The Prime technology is the new development we mentioned in a previous blog to enhance the seed quality by treating the mother crop.

Tiros is co-applied with our biostimulant package (Boost Bio, Tigga Bio, Voltek Bio) and support the colonisation of the endophytes to maximise their effect.

So not only do you get the normal benefits you would expect from a Unium biostimulant seed treatment:

The addition of Tiros adds even more nutritional enrichment. This extends beyond nitrogen and phosphorus because a balance is maintained when used in combination with a biostimulants. This means you don’t get leggy growth like you’d expect from more available N. The nutritional stoichiometry is maintained – keeping everything in balance for optimal growth.

The data below shows the comparison of the biostimulant/Tiros seed treatments alongside untreated during this year. As it is applied with a Unium biostimulants, you would expect seed performance to be at the same, but clearly it is quicker to germinate and produces more roots in the first 6 days to support establishment. 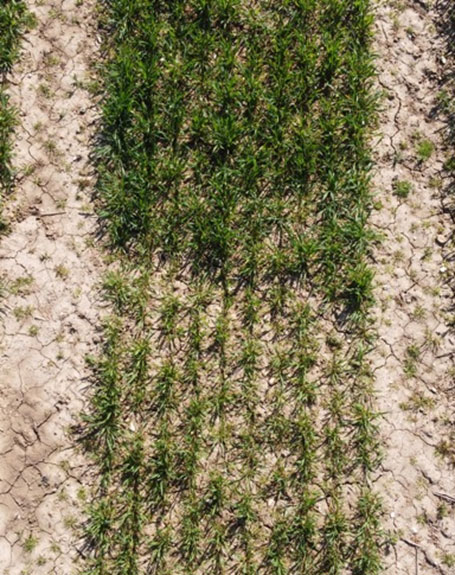 So how did this perform in the field? 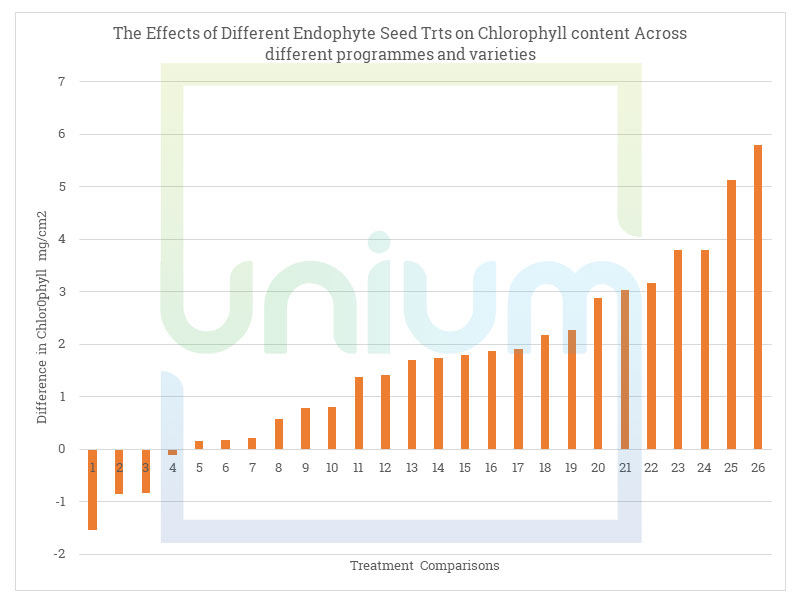 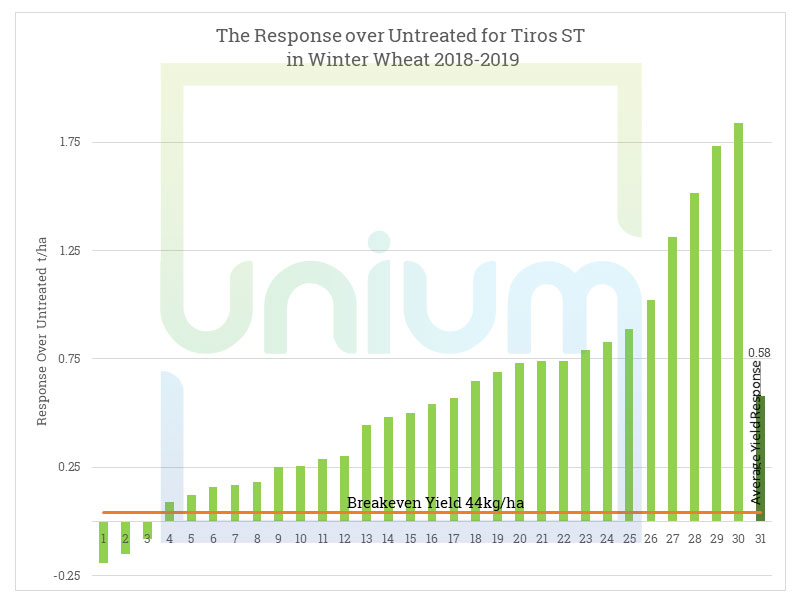 After 30 trial comparisons we can see a very good response and a return on investment of 12 :1 with a 90% chance of break even or above.

In another trial comparing Tiros (with biostimulant) to amino acids we found the following results: 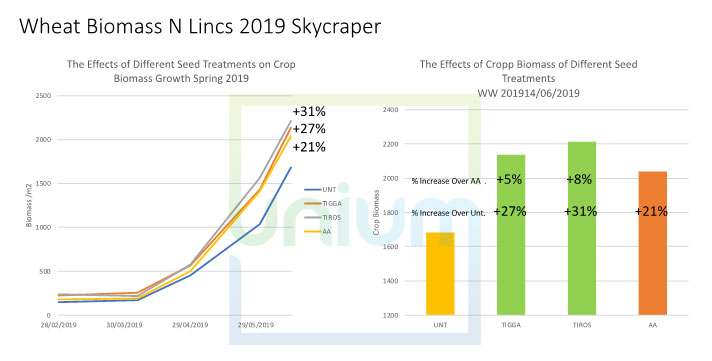 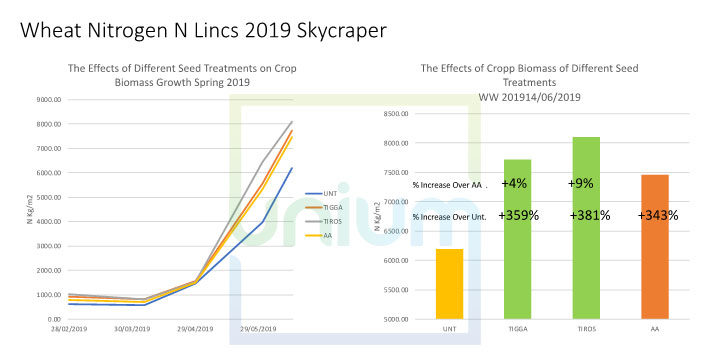 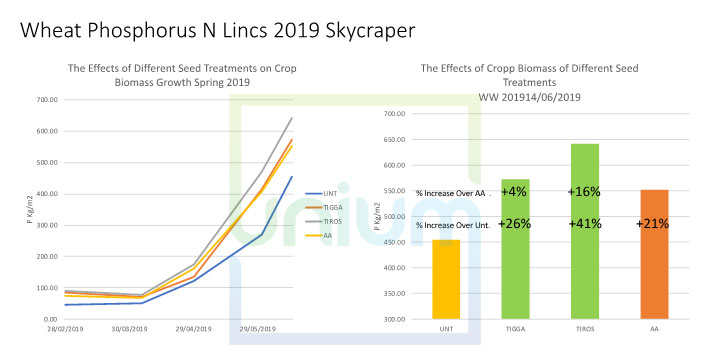 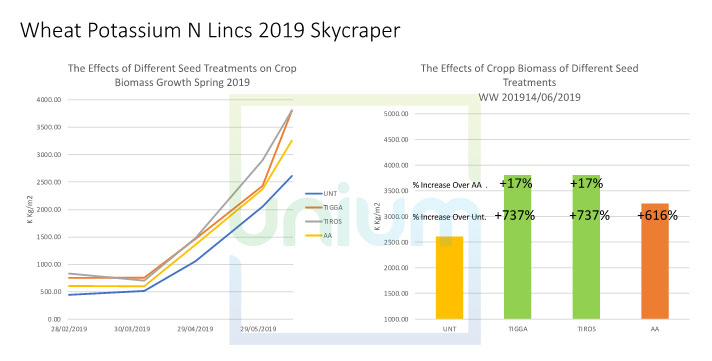 This graph shows a very good correlation between ears/m2 and the overall yield. 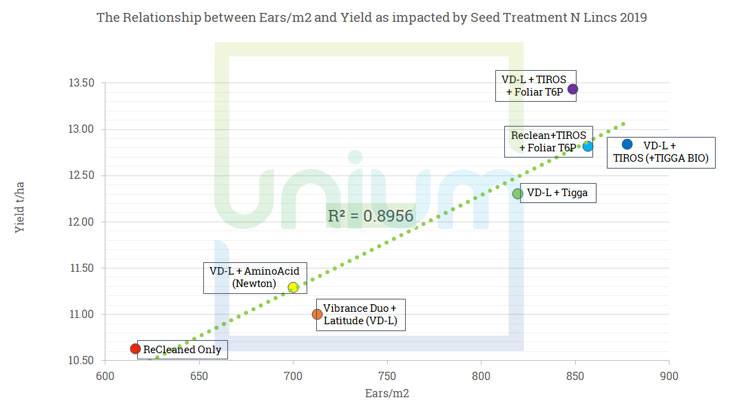 One comment – the Unium Biostimulants – Boost, Tigga and Voltek all confer a level of increased winter hardiness, this is critical for winter oats.

We look forward to bringing you the results on the trials again this year. Tiros along with its biostimulant component offers the best opportunity to get the crop off to a flying start.