The plants overall productivity depends upon a root system being able to support optimal growth during the maximum period of stress.

RISK = probability of the event happening X the consequence of it happening.

The main factors during the establishment phase which influence dry matter distribution between roots and shoots are light, nutrients and temperature.

Rhizophagy and its cycle is an increasingly interesting area of science studying the plants absorption of microbial cells directly from the soil.

TIROS is not just for establishment it’s for the life of the crop, with proven nutritional uptake benefits throughout the season and green leaf retention which lead to increased yields.

Root zone “rhizosphere” conditions not only vary with time through the crops life but can also vary at any one time with different soil depths, environmental conditions, fertiliser applications, cultivations etc.

The plants overall productivity depends upon a root system being able to support optimal growth during the maximum period of stress e.g. if dry conditions are found soon after drilling the young root system will have to grow rapidly with adequate laterals to absorb nutrients and water. Under favourable conditions this might not be required as quickly or as extensively.

The challenge, as ever, is predicting the periods of stress so we can choose an appropriately priced seed treatment as an insurance during the establishment phase. It’s an insurance against risk, where RISK = probability of the event happening X the consequence of it happening.

So, it’s with planning e.g. variety, drilling date, cultivations linked to the soil conditions (pH, moisture, OM, temperature) along with farm experience that allows the calculation of the value willing to be afforded to the insurance cost. This in principal is no different to our judgement on insuring our house against it burning down.

Thus the risk to OSR may be high due to potential dry periods and avoidance of CSFB pressure. Later drilled cereals to manage blackgrass will also find soils cooling down, leading to slower germination and establishment along with biologically-mediated supply of nutrients, so again maybe considered higher risk than September-drilled crops.

Soil conditions may change at any time e.g. moisture or highly calcareous soils holding onto the in-demand phosphorus altering a Sept drilling to a higher risk. Hence why an intimate knowledge of your soil, location, drilling date etc are crucial to making a decision, together with good product knowledge and supportive data.

Most biostimulant seed treatments (e.g. Tigga, Voltek, Boost) have an effect for 15 – 25 days and then the plant is on its own, so to speak. This is where new endophyte seed treatment, Tiros, differs. Tiros is not just for establishment it’s for the life of the crop, with proven nutritional uptake benefits throughout the season and green leaf retention which lead to increased yields.

It is clear there are many environmental factors that can impact the partitioning of photosynthates between roots and shoots and, to compound this, the effects of these factors is not constant for a single species at any given stage. The main factors which influence germination are soil biology, OM, pH, water status, nutrient status, temperature and the previous crop.

The main factors during the establishment phase which influence dry matter distribution between roots and shoots are light, nutrients and temperature. 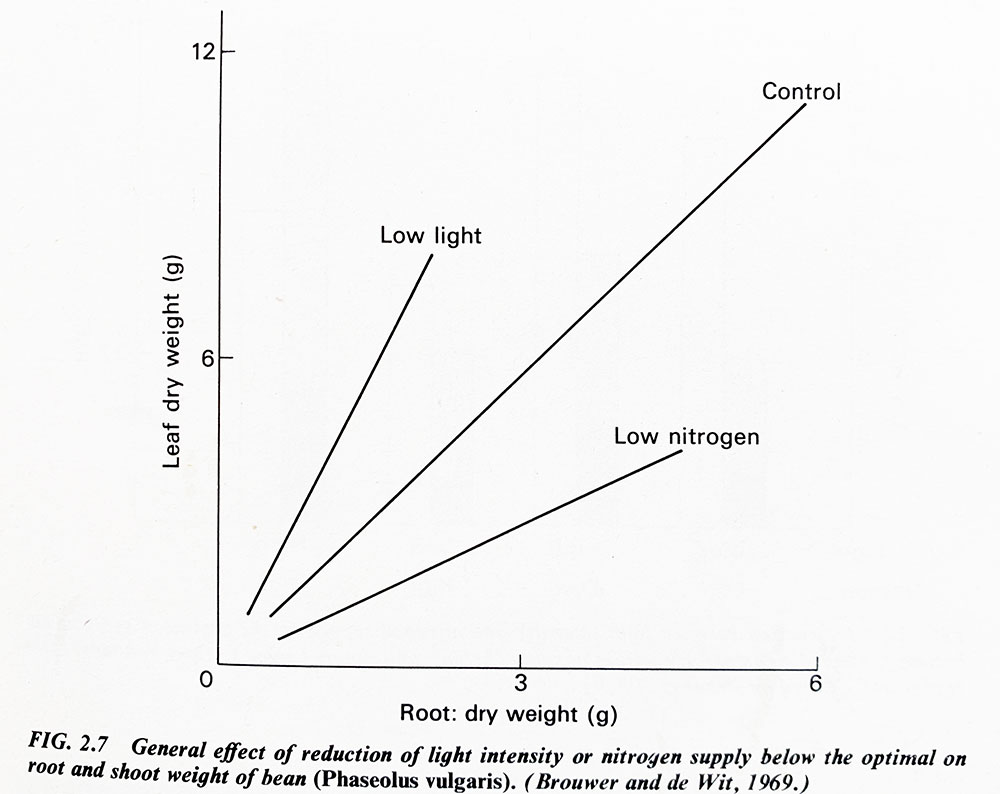 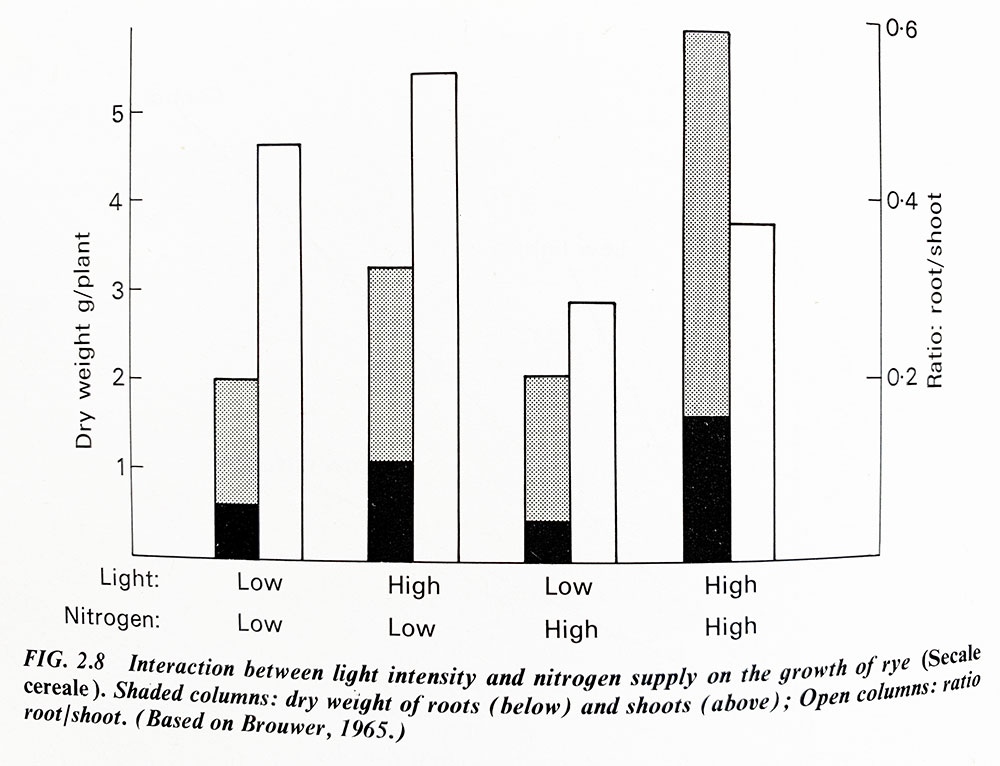 Roots are more sensitive than shoots to changes, with a 1°C change having a significant effect on growth and nutrient uptake of maize (Walker 1969). The diurnal pattern is important with the period of daylight being the most important.

Root temperature can influence shoot growth in several ways – nutrient absorption, water absorption and the modification of growth substances on the apical meristem.  So, we can see that there are many interconnected factors that can influence the root:shoot ratio. That means we have to aim to create as consistent an environment as possible to achieve the optimal ratio.

As the root tip develops and pushes through the soil it, along with the root hairs, establish the major contact with the soil. Surrounding the tip is a gel called “mucigel” and it forms the connection between the soil matrix and the root.  It is the mucigel and root exudates that create the substrate for the biology of the rhizosphere to develop in. 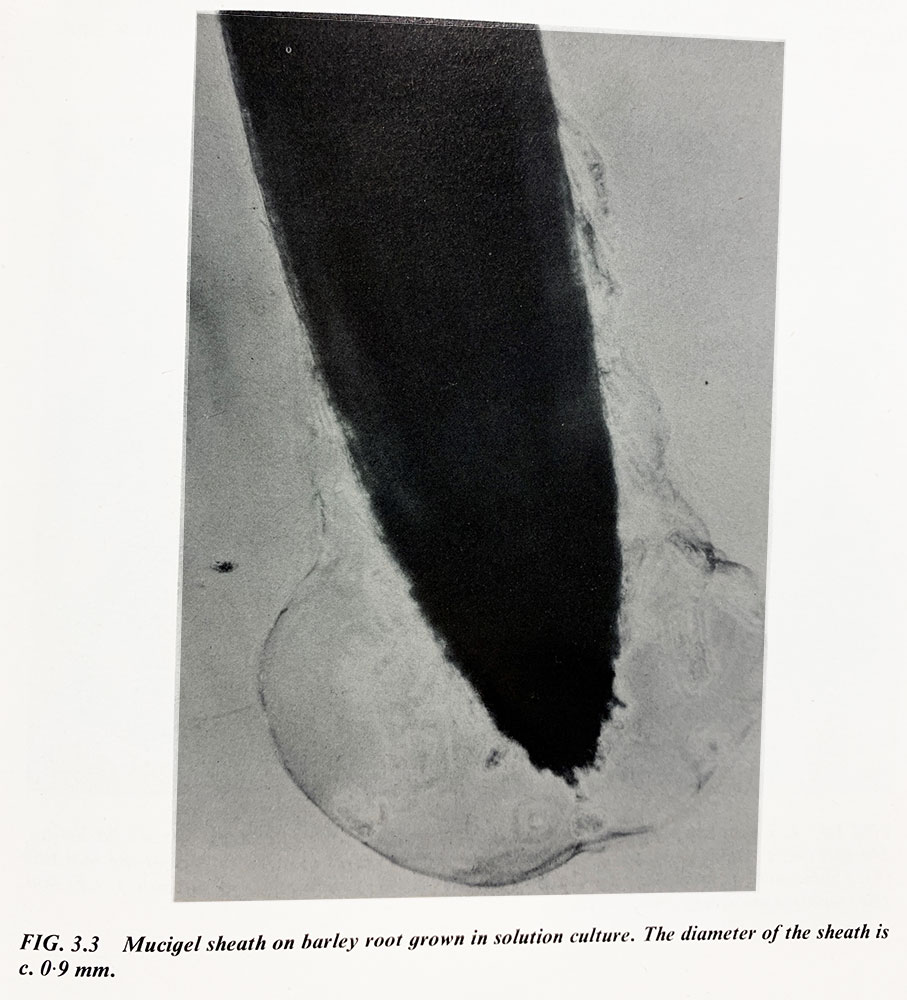 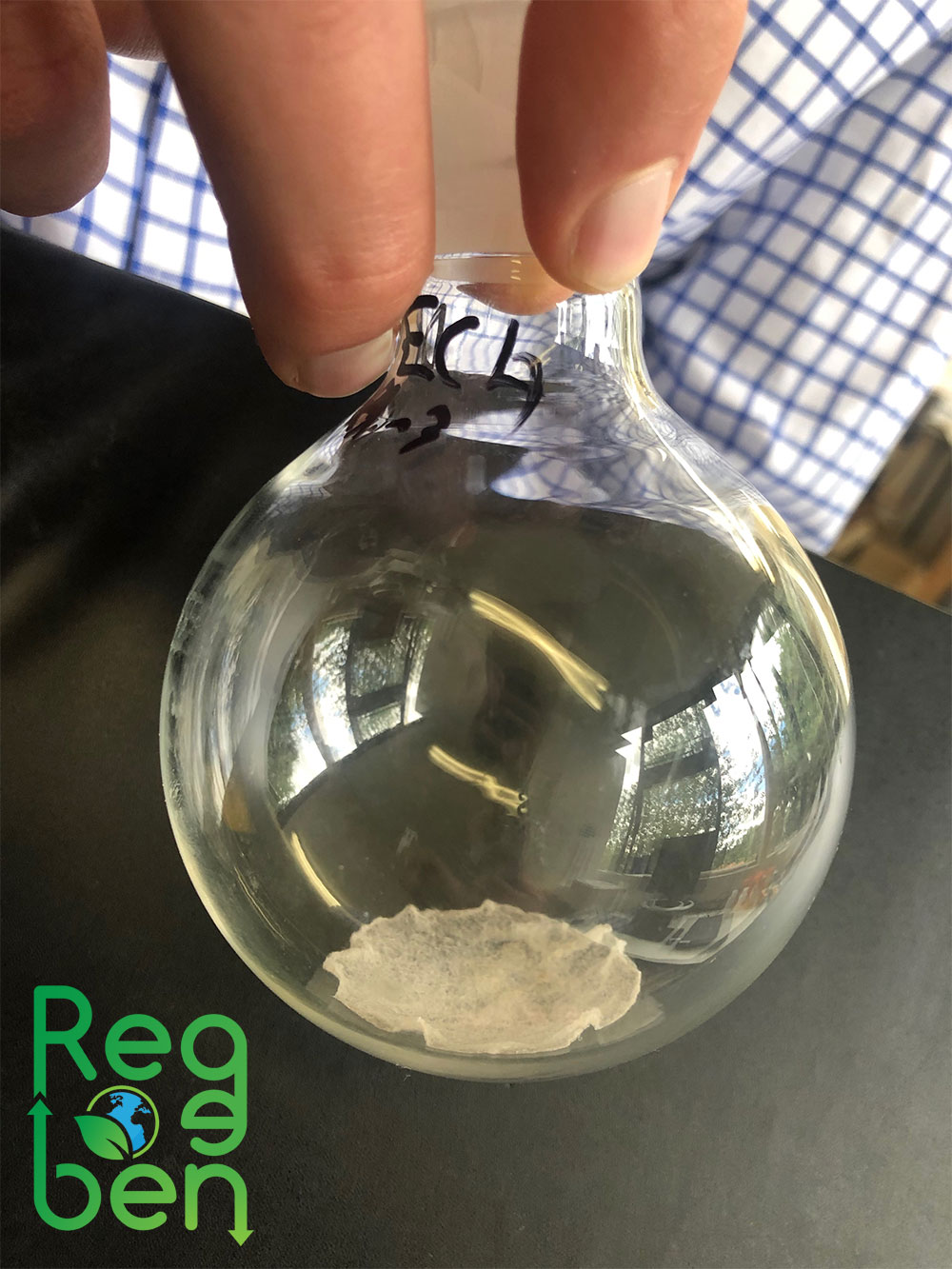 The mucigel is bound by an external membrane which often includes micro-organisms. It is exuded from the root and as it hydrolyses releases a range of sugars and other substances. It is more abundant the more micro-organisms there are in the soil.

Rhizophagy and its cycle is an increasingly interesting area of science studying the plants absorption of microbial cells directly from the soil. These are often bacterial endophytes and exchange their nutrients into the plant roots for them to be released back into the soil to repeat the process. This cutting-edge research and advice are developing so we can ultimately deliver the plants nutritional requirements using the microbial endophytes in this cycle, and not by applying ions or salts in large quantities (as is the current practice) which can disrupt this process.

The exudates, organic substances that pass for the roots to the soil surrounding the root, are produced to support the rhizosphere micro-organisms. They are made up of soluble carbohydrates, organic acids and amino acids, along with growth stimulating and inhibiting substances. The composition can vary considerably between species, esp. the amino acid profile (which could make an amino acid seed treatment blend very crop specific).

Bowen (1969) showed the effect of nutrient impacts on the exudation component of amides and amino acids.

Exudation is affected by many factors as can be seen below;

The supply of nutrients and the plants ability to utilise them is heavily influenced by the biology in the soil and the plant. The most important relationship is arguably with nitrogen, but to maintain balance it is critical the relationship of other nutrients with the soil biology is nurtured. Solubilisation and sequestration of nutrients esp. phosphorus is critically dependent upon the strong chelating agents produce by the microorganism to deliver these nutrients to plants at the critical demand periods.

A lot of these factors are taken into account within the Unium seed treatments, whether the biostimulant or biological endophytes, to maximise their availability and assimilation of nutrients for the plant, support the biology to enhance colonisation, and critically minimise any harmful effects.

The case study below shows the effects of TIROS on an early February drilled winter wheat crop through the season, with an ultimate yield increase of 0.45t/ha. 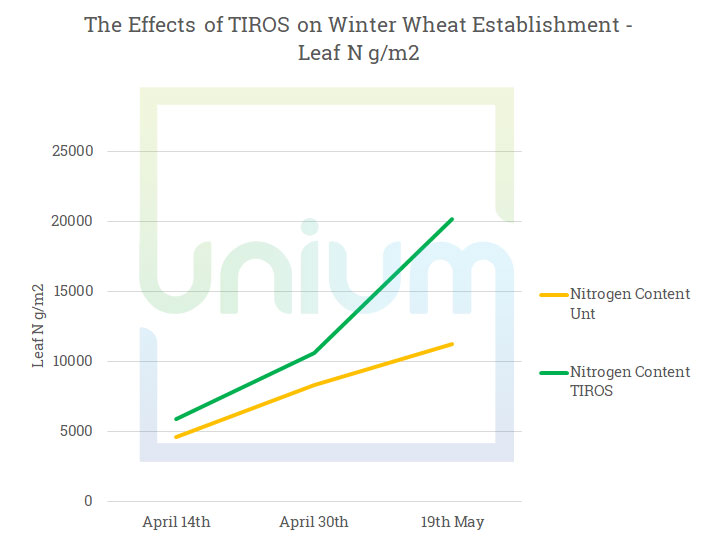 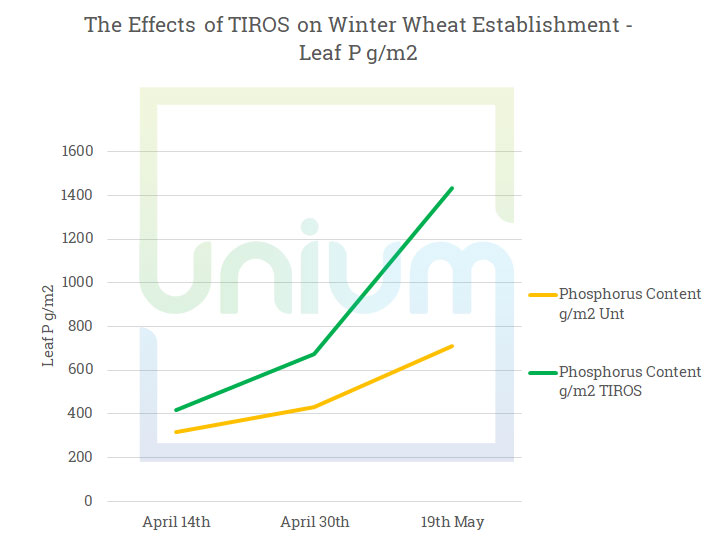 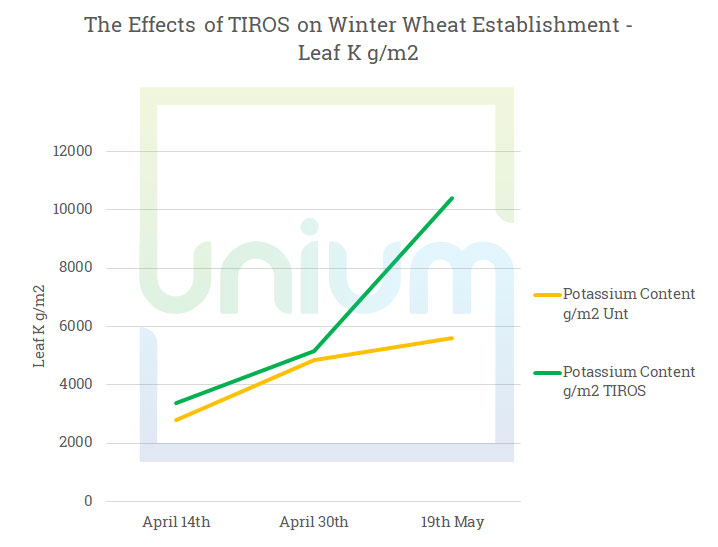 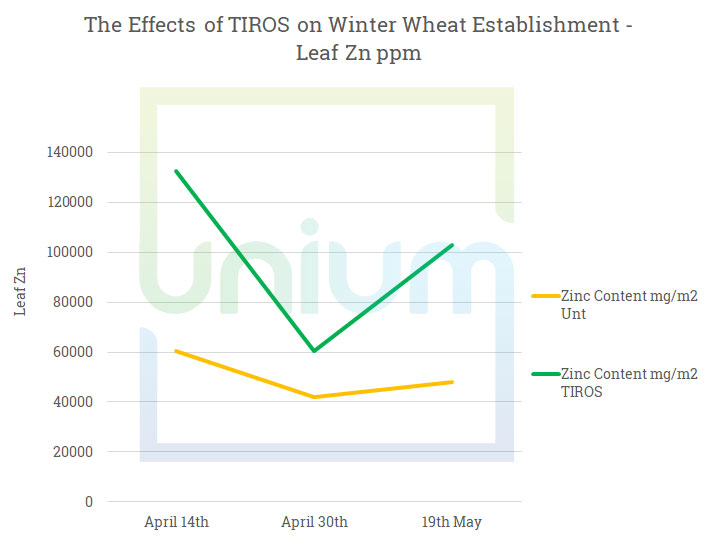 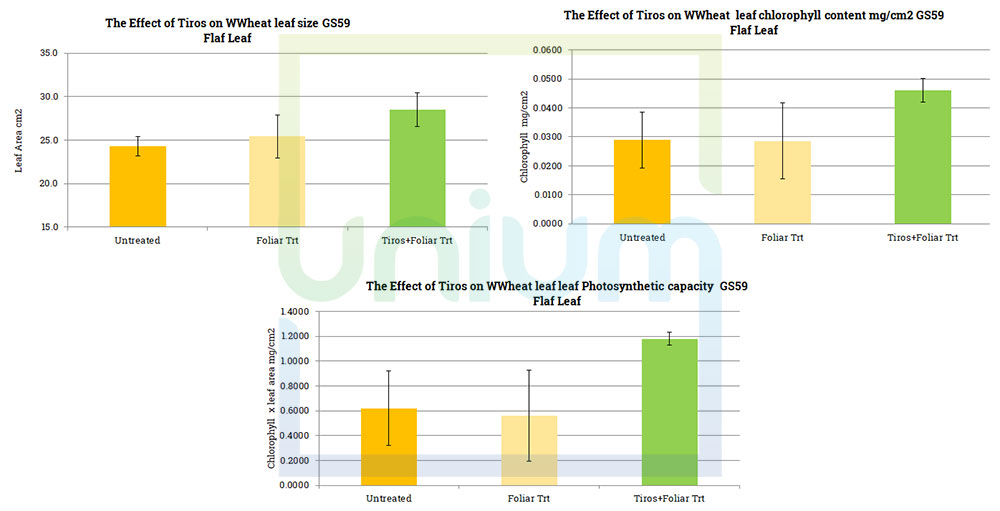 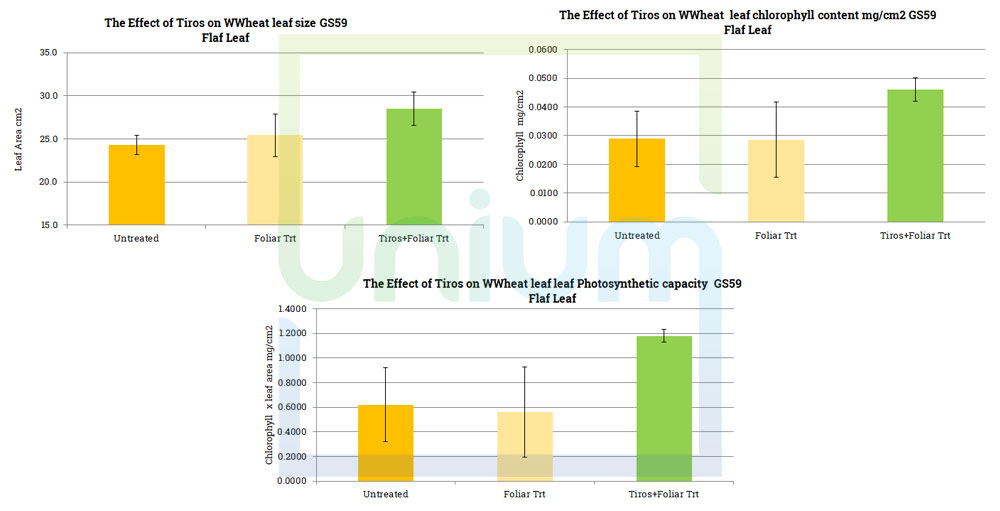 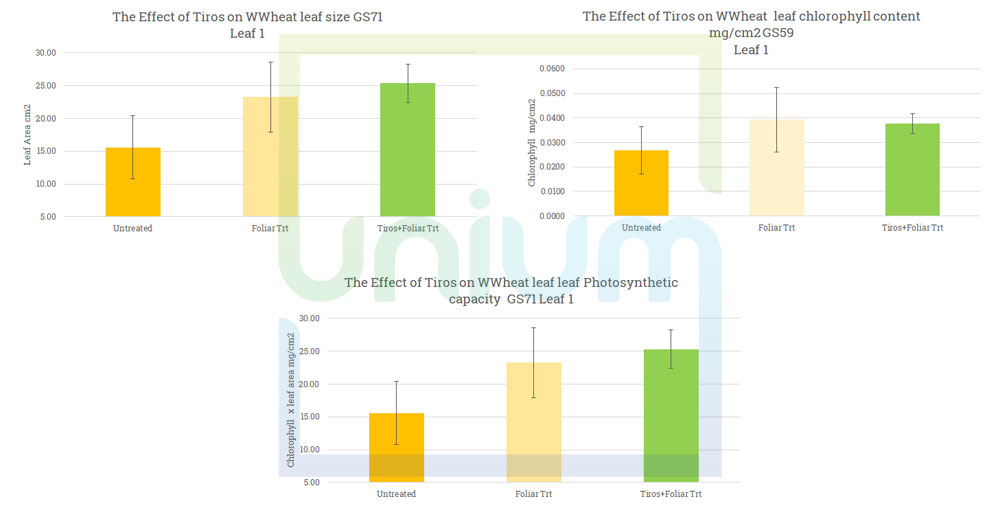 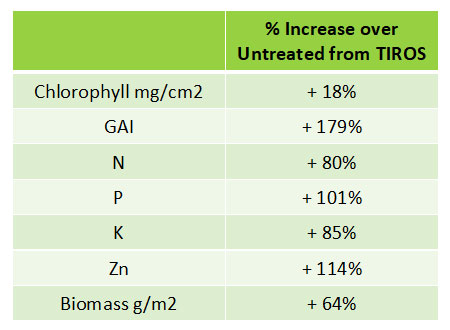 We hope this helps you to calculate your risk for this coming season. Fingers crossed the drilling period goes well.